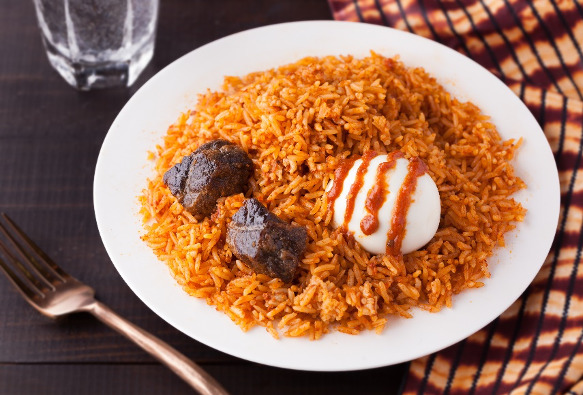 SB Morgen, a geopolitical intelligence platform, disclosed the 8.3 percent rise in the cost of preparing the delicacy in its report titled, “The SBM Jollof Index Q2: A stitch in time saves nine”.

The SBM Jollof Index tracks how much it costs to make a pot of jollof rice across 13 markets in six geopolitical zones for a family of five and uses the figures to measure the inflationary trends in the country.

Last week, the National Bureau of Statistics said Nigeria’s inflation rose 18.60 per cent in June to its highest level in more than five years, fueled by rising prices of food and the high cost of diesel.

Rising Prices
On Tuesday, SB Morgen’s report said the national average shows that prices continued to rise up till June.

The report reads in part: “Prices of seasoning, curry, pepper, vegetable oil, turkey and onions increased in most markets. The continued increase in prices can be attributed to fuel scarcity, continued foreign exchange restrictions, increased insecurity and the effect of global events, especially the Russia-Ukraine war.

“In the last few months, there has been fuel scarcity across major cities in the country, and this has had an effect on the cost of transportation and storage of frozen food.”

Also, it said increased insecurity in both urban and protected areas makes it difficult for farmers to access farmlands away from home and for traders to travel to rural areas for purchases.

“Whenever they do take these risks, the produce comes at a high cost to the consumers,” it said.

Another driver of food prices, according to the report, is production cost which has been affected by diesel prices.

“This has increased the operating costs for most businesses, thereby increasing the final cost of goods to consumers.

The report said apart from these external factors that drive prices, the internal organisation of open markets where Nigerians purchase most of their groceries influence the cost of items.

It said while these could go unnoticed when food inflation was at moderate levels, increased food prices spotlight every price driver.

“Market organisations and institutions determine who gets a space, what category of groceries they sell, and how many people sell those kinds of groceries per time. This does not only regulate the prices of groceries, but it also ensures that farmers cannot sell directly to customers,” it said.

Cost of jollof in different markets
The report said Bauchi had the highest cost at N11,600, followed by Wuse II at N11,300.

It said the noticeable pattern here is that the Northern states had a higher cost of making a pot of jollof rice despite their farming and livestock rearing occupations.

“This trend is accounted for by increased insecurity in those states. Traders who purchase from the rural markets are boycotting those areas. Transportation costs have greatly increased, not only because of fuel shortages but also because of the risk involved in travelling those kidnap-infested roads,” the report said.

It said prices have remained high in Nyanya and Wuse II markets of Abuja between April and June.

“Items that experienced a price increase were curry/thyme, pepper, vegetable oil, onions and turkey. Tomato and beef maintained their prices,” it said.

According to the report, Bauchi saw slight reductions in April, but then picked up in May and declined again in June. It said the slight declines are relieving because Bauchi was the only state that did not experience any decline in January and the state has overtaken others as the costliest state to cook a pot of jollof rice in Nigeria.

“The prices of rice, seasoning (Knorr) and pepper fluctuated during this period while others remained stable. While rice has not ceased being a staple in the region, there is a clear case of food poverty and the expected food standards have dropped considerably,” the report said.

It said it is not surprising because the North East has gone through 12 years of conflicts. Additionally, it costs more to purchase ingredients for making a pot of jollof rice in South-East markets than it does in cosmopolitan markets surveyed in Lagos.

“The region, however, experienced a price decline in the cost of making a pot of Jollof rice between May and June. This is due to fluctuations in the prices of curry, salt, tinned tomatoes and turkey while the prices of tomatoes, vegetable oil and beef remained stable.

“The tension in the South-east has waned for a while now following negotiations with leaders from the region and the IPOB group.

“This accounts for the small decline that is noticeable in the region’s index. However, we do not know how sustainable this uneasy peace will be. Other than this, the region also faces other challenges such as fuel scarcity which affects transportation and storage costs, thereby keeping food prices up,” it said.

The South-West Index showed price swings and increases in the last three months.

It said the Bodija market experienced a higher increase in price than the Balogun and Trade Fair in June.

“The prices of vegetable oil, onions and beef increased in this region. Prices were also affected by rising transportation and storage costs as a result of fuel scarcity and the insecurity in the Northern part of the country.

“While traders and buyers in these markets complained of rising prices, their problem was mostly around reducing their food quality and quantity rather than going without meals like their Northern counterparts,” it said.

The report said in the South-South region, prices of food in Port Harcourt spiked between April and June, while those of Bayside and Calabar Municipal markets rose steadily.

“While Calabar Municipal’s prices declined in June, Bayside’s remained high. Rises in the prices of vegetable oil, pepper, seasoning and turkey accounted for the price increase in Port Harcourt. Like in other urban areas, fuel scarcity and blackouts pushed prices up in Port Harcourt,” it said.

According to the report, the Kano Jollof Index maintained a surge after the spike in the last quarter but declined slightly in June.

“Prices of vegetable oil and tomato (fresh and tinned) declined slightly while that of turkey went up. The same problems affecting the other towns also affected Kano insecurity and increased energy costs,” the report said.

The report said Nigerians are running out of coping strategies and are in danger of starving if measures are not taken to buffer the effect of the rise in global rice prices.