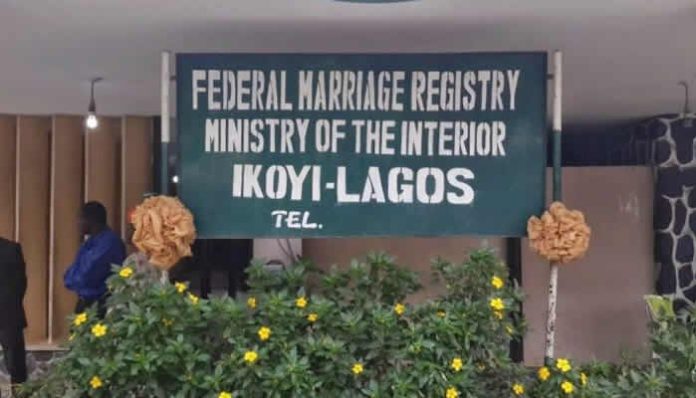 There have been a legal brawl between some Local government Areas of Nigeria against the Federal government simply for the determination of who have the power to operate marriage registries, conduct marriages and issue marriage certificates.

Statutorily, the Local governments are the ones empowered to conduct marriages and issue marriage certificates, for this reason, the LGAs have insisted that their powers to register marriages which is statutorily provided are being usurped by the Federal Government through the Ministry of Interior.

The Eti Osa LOcal Government Area of Lagos state took the Ministry of Interior and Attorney General of the Federation to court in suit no.: FHC/ LS/CS/816/18 between Eti-Osa LGA & 3 others v. Hon. Minister of Interior & 2 others (Federal High Court, Ikoyi Judicial Divaion), where the accused Federal Ministry of Interiors of usurping the Local Governments power to operate marriage registries, conduct marriages and issue marriage certificates.

They prayed the court to declare that the federal government have no business in the conduction of marriages and issuing marriage certificates and order the closure of all marriage registries opened and operated by the federal ministry of interior or through their agents including that of the Ikoyi registry.

The case lingered but recently, the federal High court sitting in Ikoyi held in the favor of the Eti osa local government and granted their prayers.