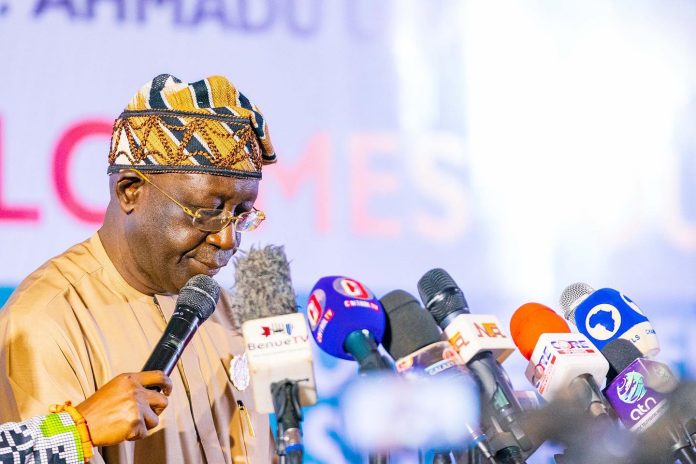 The PDP Concerned League, identified as a stakeholders’ group of the Peoples Democratic Party (PDP), has asked Iyorchia Ayu, national chairman of the party, to resign from his position.

Daboikiabo Warmate, leader of the group, who made the demand at a media briefing on Wednesday in Abuja, said the listed officials must resign on or before June 20.

The group accused Ayu of handing the party’s tickets to the “highest bidders” in the primaries across the country.

“Since the coming on board of the Iyorchia Ayu-led national working committee, some of the NWC have been immersed in one scandal or the other to the detriment of PDP,” he said.

“It is quite discouraging, distressing, nauseating and shameful to watch, listen and read on various media and conversational platforms in almost every week of the month.

“The allegations range from giving tickets to the highest bidders, to subsisting expulsion that may cost PDP exclusion from the 2023 polls, to the hijacking of the ward and local government congress committee (assignment) list, manipulation of national and state delegate list, using non-party members for PDP official assignment and unjustly disqualifying qualify aspirants and clearing aspirants with questionable certificates and loyalty.

“For example, Mr. T.P. Williams of the FCT senatorial race, comrade Ikenga Imo Ugochenyire in the Ideato north and south federal constituency race in Imo state, and right honourable Sherif Oborevwori in the Delta state gubernatorial race, among others.

“This has presented PDP to Nigerians as a party that cannot involve and invoke its political principle and morality.

“Ayu and co., six months in office, can be shamefully described as the darkest part of the history of our great party. With them at the helm of affairs of PDP, PDP will most likely lose the 2023 general election because their unpopular decisions, actions and inactions have led to the emergence of some unpopular candidates, candidates with K-legs, court cases, disenfranchisement, the crisis in some state chapters, decamping of some party members to other parties and the likelihood of PDP not able to present a candidate for the general election in some states, and have also given the party an unprintable image.”

Citing the PDP constitution, Warmate said since the party has elected Atiku Abubakar from the north as its presidential candidate, Ayu who is also from the north ought not to continue in office.

“This is inconsistent with section 7, subsection 3 (c) and section 46 subsection 3 of our great party constitution as amended 2017. It’s politically unethical and immoral,” the group said.

“Therefore, we call on the national chairman, national secretary and national organising secretary to, without any further delay, tender their resignation letters and hand over every party document and other items to their deputies as provided by our party constitution as amended 2017.

“As for the national chairman, he should hand over to the national deputy chairman (south). This is in keeping with the established internal policies of the party and constitution.”

Warmate added that “failure to tender their resignation letters on or before the 20th of June, 2022, will attract protest at the party’s national secretariat in Abuja and other forms of pressure for them to resign”.

“They have displayed enough impunity, and insensitivity that has never been seen or heard in the history of our great party,” Warmate added.