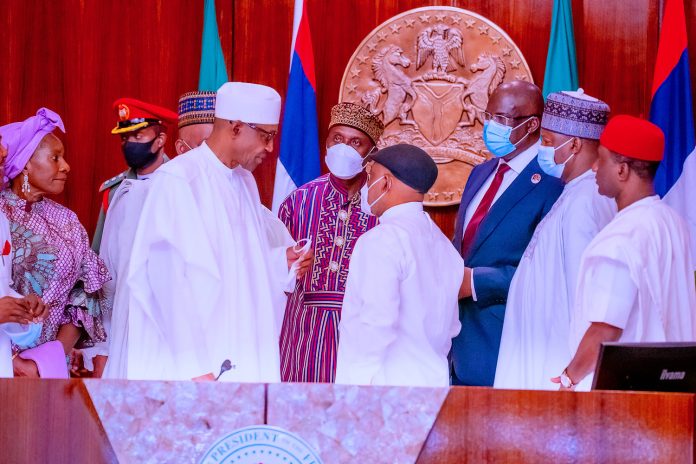 Network for Best Practice and Integrity in Leadership (NEBPRIL), a civil society organisation (CSO), has asked President Muhammadu Buhari to sack all political appointees who declared intention to leave his government on account of 2023 political ambitions.

The CSO said it would help prevent unnecessary distractions and conflicts of interest in the remaining days of Buhari’s administration.

On Wednesday, President Muhammadu Buhari had asked all members of his cabinet seeking elective office to resign on or before May 16.

Following the president’s directive, some ministers had tendered their resignation, while the president, earlier on Friday, met with the outgoing cabinet members.

However, Abubakar Malami, minister of Justice, withdrew their intentions to contest at the polls.

In a statement on Sunday, NEBPRIL, through its chairman, Victor Ogene, described it as sheer deceit for public officials to play hanky panky with their otherwise positions of trust.

“The earlier refusal to resign, or the selfish and shameless withdrawal of resignation and recanting of political ambitions by some of the ministers and other appointees, do not only offend the sensibilities of the people, it’s also a clear violation of the provisions of the Nigerian constitution,” he said.

“And this must not be allowed to stand, as it would amount to enabling unethical practice, bad behaviour and impunity in our democracy and governance in Nigeria.

“So, until the affected ministers are reappointed by the president as required by Section 147 of the Constitution, and their names submitted to the Senate for fresh screening and confirmation, they remain impostors and should not carry out any responsibility on behalf of the government. That’s the law, and we must learn to obey and protect our laws in order to deepen our democracy.

“What did the affected ministers leave in government that they want to go back to fetch? Are they recanting their political ambitions based on conviction, or is this a ploy to recoup the huge political expenses they had incurred, as many of them had already distributed branded exotic cars to oil the wheels of their aborted political aspirations? Some others have coerced kith and kin, captains of industry and desperate political contractors to raise funds, ostensibly in pursuit of their wilfully terminated aspiration.”

“Would it not be tantamount to grand advance fee fraud, to deceitfully take money from hapless citizens, when they knew, ab initio, that they won’t run a full race?

“Do they consider the sensibilities of the people to who their actions may be offensive, or do we take it that they don’t care about public perception of themselves and the government they serve?