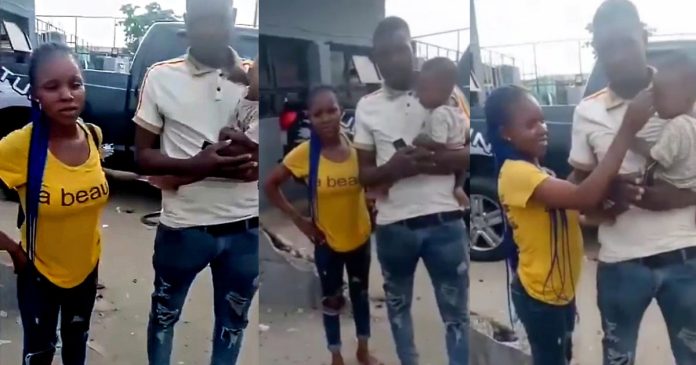 The Lagos state police command says Williams Tadule, the dispatch rider allegedly caught with a 10-month-old child inside a delivery box did not kidnap the child.

On Saturday, an undated video where a dispatch rider was being slapped for allegedly kidnapping a child, who the mob said was seen inside his delivery box, appeared on social media.

The incident was said to have happened at Sangotedo axis of Lagos state.

Giving an update on the incident, Adekunle Ajisebutu, Lagos police spokesperson, in a statement on Monday, said the mother of the baby — Lovina Bitrus — disclosed that the dispatch rider carried the child on his motorbike with her consent.

Ajisebutu said the mother allowed the rider to carry the child to pacify him for crying, adding that the child was not found inside a delivery box as alleged by the mob.

“In compliance with the directive, investigation was initiated which led to the discovery of the scene. Upon further investigation, it was discovered that the child was not stolen after all and that he was not kept in the courier box as alleged by the mob,” the Lagos police spokesperson said.

“The child’s mother, Lovina Bitrus, was contacted. It was then revealed that the child was actually taken away and put on the dispatch motorbike by the rider with the consent of his mother.

“According to the mother, the 10-month-old baby is fond of the rider who is a relative, a neighbour and was crying uncontrollably when he (rider) wanted to go pick up something in the neighbourhood. To pacify the baby, his mother allowed him to go with the rider.

“Passersby who saw the child with the rider along Sangotedo area, Ajah on the said day, became suspicious and concluded that the child might have been stolen, raised the alarm which attracted a mob. The mob subsequently pounced on the rider, beating him without finding out the truth.”