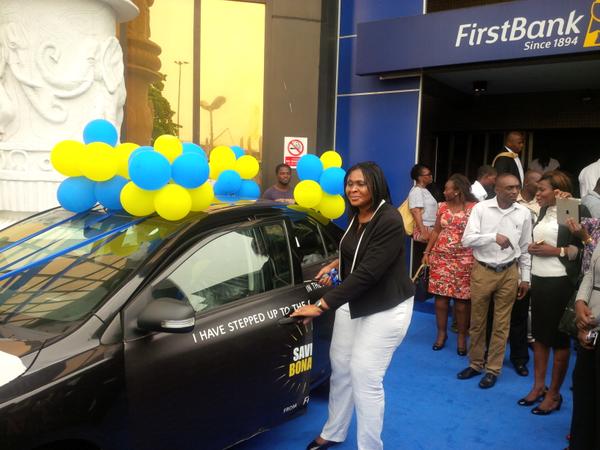 The First Bank of Nigeria Ltd. has rewarded the grand prize winner of its Verve Card campaign, Mr Olakunle Animasaun, the Chairman of Kanwl International Ltd., with a brand new car.

The 14-week promo in partnership with Verve was designed to reward Verve Card customers for their continued usage and adoption of the card for various digitally driven transactions.

The bank had given out the sum of N50 million to 2,631 customers in the promo and other prizes including cash, airtime, power generating sets, refrigerator, cooking gas and television sets.

Speaking at the prize presentation on Friday in Lagos, Mr Chuma Ezirim, FirstBank’s Group Executive, E-Business and Retail Products, said that the aim of the promo was to appreciate the bank’s over eight million Verve Debit Card holder.

“We have given out over N50 million worth of prizes to 2,631 customers including the grand prize of a brand new car to be given out today.

“We are excited at the response of customers to the promo and encourage the continued usage of the Verve Card as it is a card offering that promotes safe, convenient and rewarding digital banking service to customers,’’ he said.

Ezirim said that the bank would continue to provide the best financial services possible through its versatile products, services and initiatives to customers.

He added that the bank continue to engage in the right collaborations that would put its customers first.

Also speaking, Mrs Folasade Femi-Lawal, Head Card Business, FirstBank, described the promo as `unique and first of its kind’ across the industry in a long while.

Femi-Lawal said, “While other banks share out items, Verve and FirstBank decided to reward her esteem customers with a brand new car aside the other things.

“We started industry wide for eight weeks and then by popular demand and with the support of management of FirstBank and Verve, we decided to extend by six weeks, so the entire promo ran for 14 weeks.

“What is actually germane about this particular winner is to underscore FirstBank support and Verve to SMEs and businesses,” she said.

Mr Vincent Ogbunude, Divisional Chief Executive Officer of Verve, said that the company would continue to focus on providing secure and innovative payment solutions to its customers.

“But beyond this overarching goal of ours, we are also committed to creating on the look customer experiences to our card owners, those that have chosen us as their preferred option for cards and we look to rewarding them for their loyalty.

“This is the reason behind this collaboration with FirstBank to do this national consumer promo and today, we will be taking the excitement a notch higher with the presentation of the gifts items.

“FirstBank and Verve have had a unique partnership and we believe that this is just one of the many initiatives that we will carry out and this is underpinned by our common desire to give the best experience to customers and to reward them for patronage,’’ Ogbunude said.

The star prize winner, Animasaun, thanked FirstBank and Verve for finding him worthy to be the winner of the grand prize.

“This car that has been given to me today is a surprise to me because I didn’t expect it, when they contacted me, I thought it was a scam, until my wife asked me to go to the bank and verify after receiving series of calls.

“When I got to the bank I was congratulated for winning a car. I thank FirstBank so much,’’ he said.

The News Agency of Nigeria (NAN) reports that the representatives of the National Lottery Commission, Federal Competition and Consumer Protection Commission (FCCPC) and the Lagos State Lotteries and Gaming Authority, witnessed the grand finale.