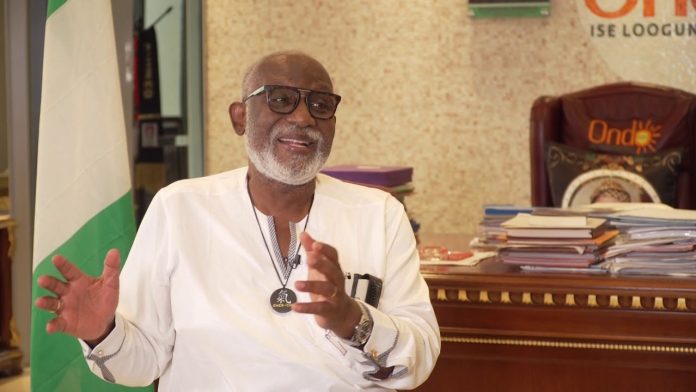 Following the rumoured death of the Ondo State Governor, Mr Rotimi Akeredolu, the governor and his handlers have released a video in which the governor was seen singing and dancing inside a room.

Recent media reports had claimed that the governor was hospitalised abroad.

But his Chief Press Secretary, Mr Richard Olatunde, in a statement, faulted the report, saying that Akeredolu, on March 23, 2022, sent a letter to the state House of Assembly that he would be away for 14 working days as the first part of his 2022 annual leave, thereby transferring power to his deputy, Lucky Aiyedatiwa.

Last week, another report claimed that the governor died in a German hospital.

The governor’s wife, Mrs Betty Anyanwu-Akeredolu, who posted the video that has since gone viral, on her Facebook page on Sunday, confirmed that her husband is currently on vacation.

In the video that lasted 19 seconds, the governor was seen in a room with a man suspected to be one of his aides, singing gospel songs and dancing.

The date the video was recorded was not stated.

The governor’s wife wrote, “Baba Aketi niyen! Dey enjoy your vacation jare. A begi wetin I dey hear, gist kini? Shitloveragain? Na you go waka go hell fire! (That is Baba Aketi, continue enjoying your vacation. What am I hearing? ‘Shitlover’ again? It is you that will go to hell fire.)

A post on Instagram had claimed that the governor is down with prostate cancer and is currently on live support abroad.