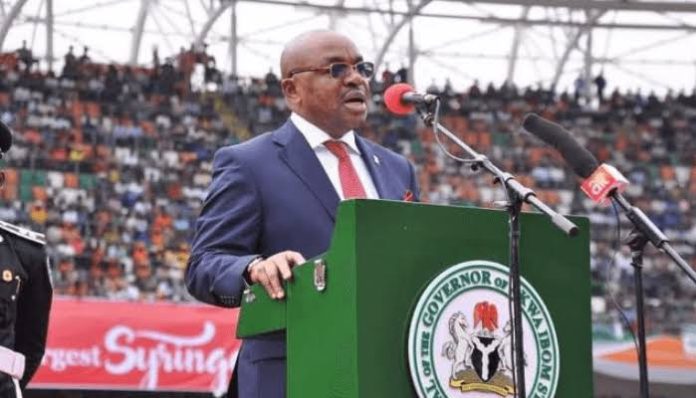 At his inaugural speech on 29th May 2015 , Governor Emmanuel Udom said “I stand before you today not as a master but as a servant and not as a boss but as a co-labourer.

I accept, with great humility and sense of responsibility, the mandate you have freely given to me to hold power in trust for you are your Governor. You have kept your part of the covenant and I intend to keep my part by executing the programmes I enunciated to you during my official declaration to run for the office of Governor.

To transform the economy of our State via industrialization and sustain public-private sector initiative, thereby opening up opportunities for growth and improved living standards… To pursue the task of Rural Development and Integration with all vigour, bring the benefits and dividends of our democratic governance to every nook and cranny in the state, and provide basic amenities of life to all.

To provide trade, commerce and tourism between Akwa Ibom and the rest of Nigeria, and in fact, the rest of the world.”

On healthcare, a great number of hospitals in the state were in the state of ineffectiveness with decayed structures, insufficient medical equipments for.

“In healthcare delivery services, I make bold to say unequivocally that we have done extremely well. When we came in, most of the general hospitals were derelict.

Today, because of our belief that a healthy population is a good measurement range of a working Government, we have refurbished, remodeled and equipped with the most modern amenities the general hospitals in all the Ten Federal constituencies.”

Governor Udom Emmanuel has left no stone unturned in the revamping of the health sector for effective healthcare delivery for the people of the state.

While the state government has intensified efforts to establish new hospitals across the state, the already existing ones received facelift.

For example, General Hospital, Etinan, has been reconstructed and equipped with top-notch medical equipment.

Residents of Ikono can attest to the fact that the General Hospital, Ikono, has not just been reconstructed but now has state-of-the-art medical equipment installed in the hospital.

To ensure the procured equipment are utilised to the fullest and manned properly, 20 Biomedical Engineers were trained for maintenance of equipment while they will train others in turn.

While commissioning the remodeled and reconstructed General Hospital, Etinan, on September 23, 2017, and in appreciation of the feat recorded by Governor Udom Emmanuel in the health sector, the Vice President, Prof. Yemi Osinbajo stated thus: “This is an extremely useful project, it is the type of project, I believe touches the lives of the people directly”.

Immanuel General Hospital, Eket, has also been remodeled and equipped. The hospital has been digitized to cater for healthcare challenges in line with the current times.

It has been equipped with the most modern intensive care unit facilities. While commissioning the hospital, the Governor maintained that he was going to extend the same to Ikot Abasi and Ikot Ekpene General Hospitals.

Remodelled and equipped General hospitals (secondary health facilities) across the three Senatorial districts, the state government built a 300-bed space Isolation and Infectious Diseases treatment center in Uruan LGA and another at the Ibom Specialist Hospital Uyo to address the ravaging COVID-19 pandemic.

The 300 bed-space Isolation Centre which is located within the Ituk Mbang General Hospital Uruan LGA was among the projects the governor commissioned to mark his 5th anniversary in office.

In other sectors, Governor, Udom Emmanuel had reiterated that his administration has attracted over 20 “economically viable and employment-generating” industries to the state since he was sworn into office in 2015. His administration has created quality jobs in an unprecedented manner.

Gov Emmanuel has urged the people of Akwa Ibom State to continue to support his administration’s quest to leave a lasting legacy of one united and prosperous state for posterity.