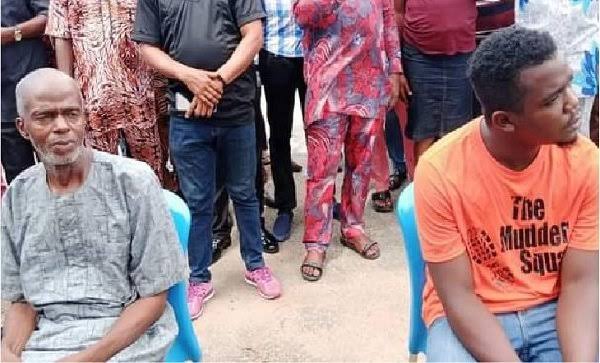 The father of the alleged killer of Iniubong Umoren, a job seeker in Akwa Ibom, Frank Akpan, has denied allegations that his family was into killing for organ harvesting.

The 64-year-old retired civil servant, who refuted the claims during an interaction with newsmen, said he was only aware of the murder when the police invited him for interrogation.

Sources told Newsmen that the remains of Iniubong were buried without the head, further fueling insinuations that she may have been killed for ritual purpose.

According to reports, no fewer than 10 graves were uncovered at the compound where she was murdered and buried in swallow grave even as the place was strewn with children books, uniforms, and a corper’s boots.

But Akpan said he was not around when the incident occurred, bemoaning that he never believed such a dastardly act could be committed by his son.

“I am not happy about what my child did. I didn’t even believe this can happen to me after I sent them to school, tried to bring them up,” he said.

Asked if he believes justice would be done in the matter, he said: “Yea, justice can be done if the system so permits.”

On the fact that his son admitted to taking advantage of six girls in the compound, he said: “I’m not aware of that.

The reason is that we just relocated from Abuja. I have not been around for 30 years. We have been living outside. We just relocated because I have been retired. It is not even up to two years since we came back.”

The prime suspect, 20-year-old Uduak Akpan, and a 300 level student of Public Administration, Obong University, Obong Ntak, who admitted committing the heinous crime, said he was ready to die if that would serve the true course of justice.

“I am not happy about what has happened. But the commissioner of police has assured Akwa Ibomites and the entire world that justice will take its course,” he said.