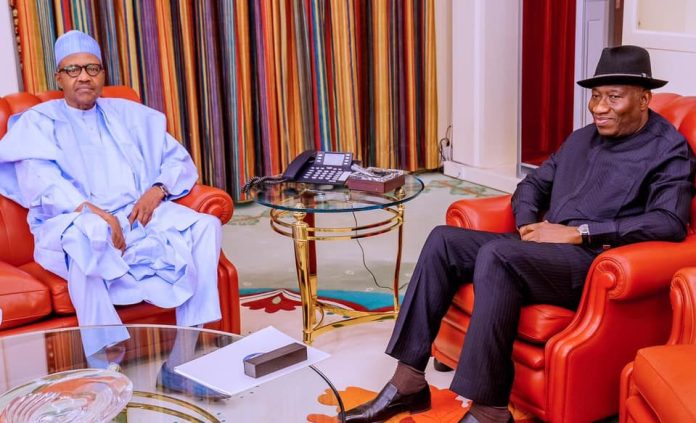 Former President Goodluck Jonathan will only be joining the All Progressives Congress presidential race on the condition that he is endorsed by the President, Major General Muhammadu Buhari (retd.), Saturday PUNCH has learnt.

Anything short of this would not be acceptable to Jonathan who served as deputy governor, governor, Vice-President and President on the platform of the Peoples Democratic Party from 1999 and 2015.

On Thursday, however, posters of the ex-President flooded the national secretariat of the APC on Blantyre Street, Wuse 2.

On Friday, youth and women groups demonstrated outside of Jonathan’s office in the Maitama area of Abuja.

The demonstrators, who arrived in five large buses, held up placards some of which read, ‘Jonathan, Please Run’, ‘Jonathan, do the needful’, ‘Jonathan for 2023’, ‘Jonathan Declare Now’ and ‘Goodluck Please Come Back, We Love You’.

However, a top source in the APC told Saturday PUNCH that the former President was seeking an assurance that he would be handed the party’s Presidential ticket.

The APC chieftain, who wished to remain anonymous, said, “Jonathan has already been President before. So, the APC cannot offer him anything except the Presidential ticket. Imagine him contesting against Osinbajo and Tinubu and losing? Wouldn’t that be disgraceful?

“So, he has made his position clear. If he is to come to the APC, he must be given the assurance that he will be given the party’s ticket. That is his demand.”

The source added that the former President may be sold as a “compromise candidate” amid the raging zoning debate in the country.

“Jonathan is the only Nigerian alive that can promise to serve only one Presidential term and abide by it because he is limited by the constitution. If he serves one term, then power returns to the North. It is also not an easy decision but I can assure you that President Buhari will have no qualms with a Jonathan Presidency,” he added.

Meanwhile, it was learnt that the APC National Working Committee would give special waivers to select aspirants based on the powers conferred on it by the National Executive Committee.

Section 31.3 of the new APC constitution titled ‘waiver’, reads in part, “Subject to the approval of the National Executive Committee, the National Working Committee may, in special circumstances, grant a waiver to a person seeking a national party office, who is otherwise not qualified under this constitution if, in its opinion, such a waiver is in the best interest of the party.

“Subject to the approval of the National Executive Committee, the National Working Committee may, in special circumstances, grant a waiver to a person seeking the office of President, Vice President, governor, deputy governor, senator, member of the House Representatives, who is otherwise not qualified under this constitution if, in its opinion, such a waiver is in the best interest of the party.”