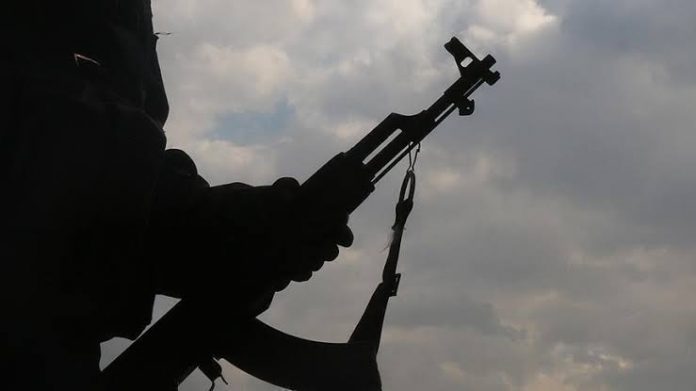 There seems to be uneasiness in Ebonyi State, following the shooting of two soldiers and a civilian at a checkpoint in the State.

The incident which occurred yesterday night, revealed that unknown gunmen shot the two soldiers and the civilian at a checkpoint on the Timber Junction area, in the Afikpo North Local Government Area of the state.

Those injured as a result of the incident were rushed to an undisclosed hospital for treatment while the deceased were deposited at the hospital.

It was gathered that the victims were attacked at about 8.48pm of the penultimate day as their riffles were reportedly carted away. Other soldiers at the Checkpoint ran inside the bush for safety.

A community source, who spoke to Newsmen on condition of anonymity, said the gunmen arrived the checkpoint in a white bus and as the military men stopped them for a search, they opened fire on them.

According to him, the situation threw the two busy towns of Amasiri and Afikpo into panic, as natives especially petty traders hurriedly packed their goods and went home.

“It’s a very sad situation here. They said it was people suspected to gunmen, who came to the checkpoint at Timber Shade (boundary Ehugbo and Amasiri) in white bus.

“As usual, it appeared the military were checking them and all of a sudden, they opened fire on them. Two of the military men, a man and woman, died. Others ran away.

“The area is as quiet as the graveyard. These bordering villages used to be very busy and people here are farmers and traders. But the moment that happened, people started going home.

Nobody is seen outside as I speak to you. Every place is calm. There is fear here now. My brother, the world is about to end,” the source said.

A reliable security source confirmed the incident at the time of filing this report.

Newsmen gathered that the DPO of Afikpo North LGA is said to be aware of the incident but has not yet notified the Public Relations Department of the Ebonyi State Police Command.

This is coming barely 10 days after three policemen were shot dead by gunmen in the state.