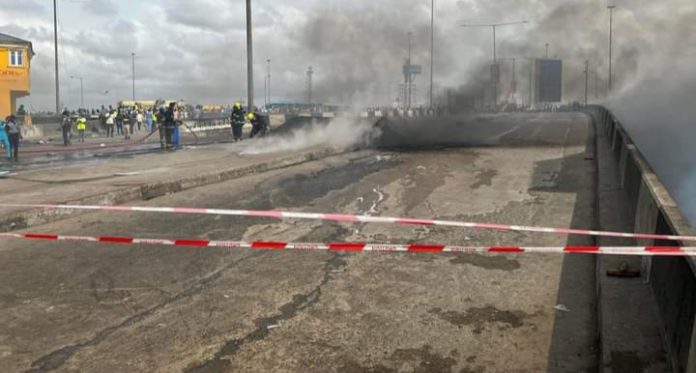 The Lagos government has ordered the closure of the Eko Bridge following a fire outbreak in Apongbon area of the state.

Earlier yesterday, a fire broke out at the Apongbon market, and it took hours to bring the situation under control.

The fire also affected a section of the bridge.

As a result of the development, the federal ministry of works had said integrity tests would be conducted by a team of engineers from the federal government and Lagos state.

The federal government has also given traders and squatters under bridges in Lagos till March 31 to vacate such areas.

In a statement, the Lagos government said the bridge will remain closed pending the conclusion of the integrity test.

“TRAVEL ALERT: Eko Bridge has been shut indefinitely by the Lagos State Government due to a fire outbreak at Apongbon in the early hours of today,” the statement reads.

“Bridge likely to remain closed until an integrity test is conducted. All are advised to factor development into their travel plans and consider security/safety in the selection of alternative routes.”

Alternative routes include the Ijora/Apapa area, the Leventis/UBA roundabout to connect Marina area, or the Ebute Ero axis to link Inner Marina and Third Mainland Bridge.