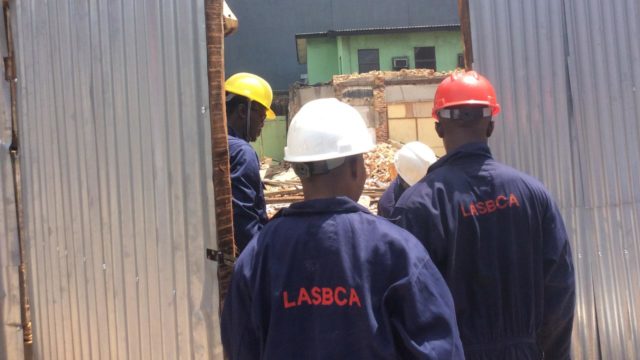 As part of its ongoing campaign against building collapse, the Lagos State Building Control Agency says it has marked six highly distressed buildings on Lagos Island for demolition.

A statement by LASBCA, signed by its Head of Public Affairs, Adetayo Akitoye-Asagba, said occupants of illegal attachments to buildings in the area had been ordered to quit.

According to the statement, the General Manager of LASBCA, Arc. Gbolahan Oki, while supervising the special enforcement exercise, said that the agency was acting on the mandate to identify and remove distressed and non-conforming buildings within the metropolis to forestall needless tragedies.

While giving a seven-day vacation ultimatum to occupants of illegal attachments, he stated that buildings in the axis were notorious for illegally adding attachments to their frontages, thereby obstructing the layout and making the approach less visible.

“Some of the distressed buildings are quite difficult to detect due to illegal attachments in their frontages. As such, we need to remove them to reveal the actual state of the buildings,” he said.

Oki lamented the spate of illegal and unapproved building construction in the area despite government enlightenment campaigns and stringent enforcement measures.

He reiterated that it was illegal to erect buildings without obtaining the necessary approvals and going through stage supervision and eventual certification of the building as fit for habitation by LASBCA.

Noting that the on-going demolition exercise was a wake-up call to all developers and property owners in the state to build by the rules, he said the Lagos State Government would continue to come down heavily on any act of disregard for the State Urban and Regional Planning and Development Law 2019 as amended.

He emphasised that LASBCA would not relent in removing both distressed and non-conforming buildings in the state, while the cost of removal would be at the expense of the owners.