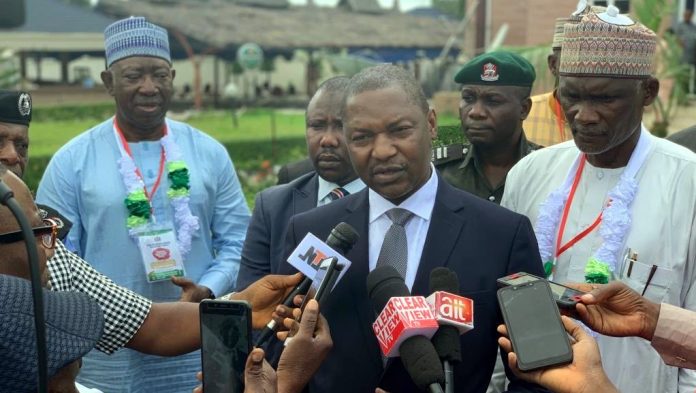 The Attorney General of the Federation, Abubakar Malami (SAN), yesterday, confirmed that policemen dispatched to Magodo Phase 2 Estate area of Lagos State were there on his orders.

Malami also faulted the criticism of the South-West governors, saying nothing was unruly about the operations of the police officers’ presence at the estate.

This was contained in a statement by Malami’s Special Assistant on Media and Public Relations, Umar Gwandu.

For days, policemen besieged the estate in the company of suspected land grabbers and members of a family who had planned to demolish property in the choice estate to execute a Supreme Court judgment. The development caused commotion at the estate as landlords and tenants panic over their fate.

The South-West governors had in a statement signed by Ondo State Governor, Rotimi Akeredolu, on Wednesday faulted the alleged roles of the IGP and the AGF.

“We condemn, very strongly, this brazen assault on decency. We call on the IGP to explain the justification for this intrusion. This is not acceptable. Any expectations of rapprochement between so-called federating units and federal security agencies are becoming forlorn, progressively, due to deliberate acts which mock our very avowal to ethics and professionalism.

“We condemn, in very clear terms, the role of the Attorney General of the Federation, Mr Abubakar Malami SAN in this act of gross moral turpitude,” the governors said.

But reacting in a statement Malami said, “It is important to state that the Office of the Attorney General of the Federation belongs to the Executive arm of the Government. The Supreme Court belongs to the Judiciary.

“The role of the executive is, in this respect, simply to aide the maintenance of law and order in due compliance with rule of law arising from giving effect to the judgment of the apex court of the land.

“Let it be known that the issue is regarding a Supreme Court Judgement that was delivered in 2012 long before the coming of President Muhammadu Buhari’s administration in office at a time when Malami was not a Minister.

“The judgment was a reaffirmation of the judgments of Court of Appeal and High Court delivered on 31st December, 1993.”

“It is widely reported in the papers that the Lagos state Governor was quoted to have said “I’ve spoken extensively with the Inspector-General of Police and the Honourable Attorney-General, and we’ve resolved all the issues”.

“The Office of the Attorney General of the Federation and Minister of Justice, would appreciate if the coalition of the Governors will help to unravel the circumstances preventing the Lagos State Government from enforcing the court order despite several attempts from 2012- 2015 and so-called settlement initiative started in 2016.

“Some of the cardinal pillars of democratic Government are the doctrine of separation of powers and obedience to the rule of law inclusive of Court Orders.

“We want restate that sanctity of the rule of law is not a matter of choice,” the statement added.