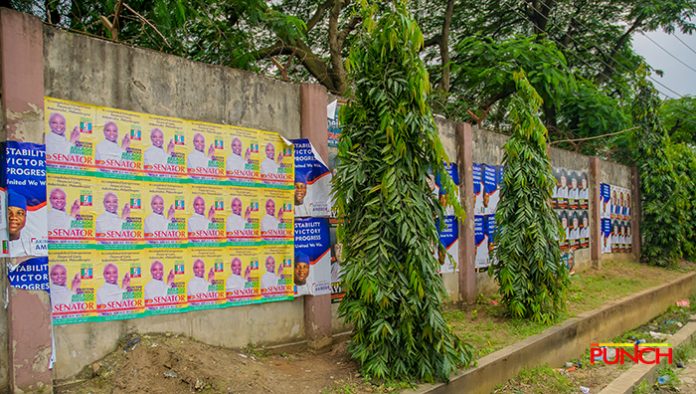 The Lagos State Signage and Advertisement Agency (LASAA) has issued guidelines on the use of election campaign materials for the 2023 polls.

The guidelines cover different categories which include billboards, wall drapes, banners, and posters.

The guidelines, which also outline penalties for violators, were contained in a statement issued on Friday by Adedamola Docemo, managing director/chief executive officer of LASAA.

For A-Frame, “this may only be placed on road verges, medians on inner streets and must not exceed a size of 2×1 meter (big size) and 0.5×0.5 meters (small size)”, and it “must have a distance of not less than 100 meters between each sign deployed, which must be made of standard and sturdy materials to ensure that they do not drop or block the roads”.

On the use of banners, LASAA said “this may only be displayed on inner roads and streets, subject to the following conditions: a. Only if the banner is attached to the wall of a particular building (with the consent/agreement of the building owners) limited to inner streets; b. Not to be tied to poles or public utilities (electric and telecom poles)”.

For posters, “they may be pasted on designated surfaces on inner streets only and are not to be seen on highways, major roads and high streets”.

“The Agency strongly suggests that political parties and aspirants must refrain from indiscriminate deployment of campaign posters and embrace the use of other creative and innovative platforms, including: Stick in the ground, billboards, mobile A-frames, mobile adverts.”

The agency added that elective office hopefuls must make an official request for allocation of spaces at different locations to deploy sticks-in-the-ground and mobile A-frames.

According to LASAA, “all the advertising materials must be removed after the 2023 elections”.