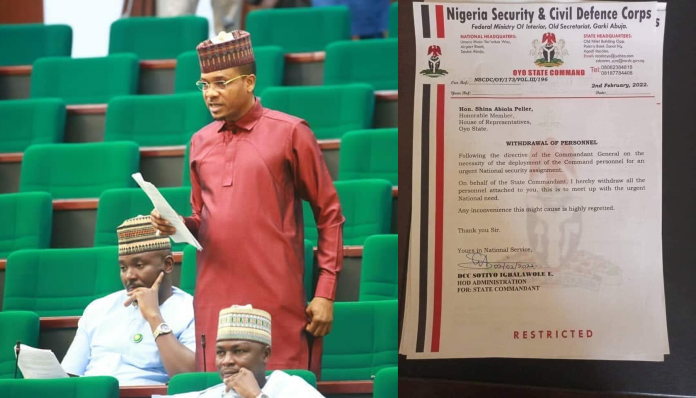 The Nigeria Security and Civil Defence Corps (NSCDC) has withdrawn its personnel attached to Shina Peller, a member of the house of representatives.

An aide to the lawmaker confirmed the development to newsmen yesterday.

The development comes hours after the lawmaker, who represents lseyin/ltesiwaju/Kajola/lwajowa federal constituency of Oyo state, sponsored a bill seeking to scrap the security agency.

Peller had said the mandate of the NSCDC has “expanded”, adding that “it has now become a duplication of the police and has led to avoidable conflicts”.

He said the duties of the NSCDC are being performed by the police, adding that retaining the former is a “waste of scarce resources”.

In a letter seen by newsmen, dated February 2, 2022, and addressed to Peller, NSCDC said it is withdrawing its personnel for an “urgent national security assignment”.

“Following the directive of the Commandant General on the necessity of the deployment of the command personnel for an urgent national security assignment, on behalf of the state commandant, I hereby withdraw all personnel attached to you,” the letter signed by Sotito Igbalawole, head of administration, Oyo state command, reads.

“This is to meet up with the urgent national need.