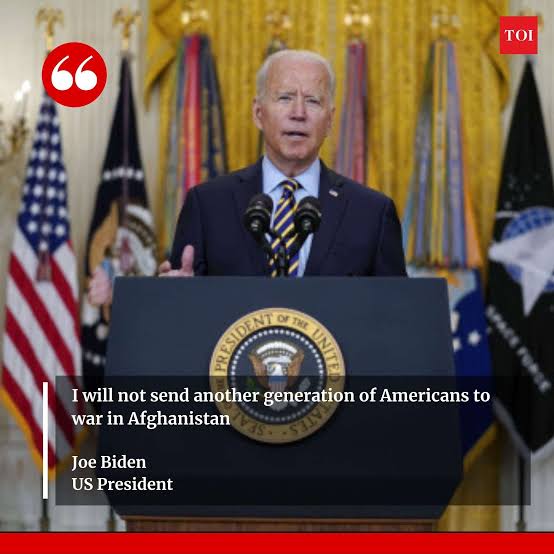 US President, Joe Biden has blamed his predecessor Donald Trump for the collapse of the Afghanistan government to Taliban militants.

The Taliban has taken control of the government of the country after overpowering Afghan security forces in different parts of the country, with some surrendering without even putting up a fight.

With Kabul now in sights of being conquered by the Taliban, Biden, who is facing an inflation crisis, border immigration crises, covid-19 delta wave crisis and an infrastructure spending bill delay in the house floor, has now blamed Trump for the collapse of Afghanistan, saying Trump’s agreement with the Taliban last year to withdraw US forces left him with no choice than to follow through or risk more US lives.

Biden’s has ordered additional military forces to go to Kabul as the situation in Afghanistan deteriorates.

The US is drawing down its embassy and is removing personnel from the central Asian country, but more help is needed as the Taliban tightens its grip.

Biden’s speech as published on the White House website reads;

“Over the past several days, I have been in close contact with my national security team to give them direction on how to protect our interests and values as we end our military mission in Afghanistan.

First, based on the recommendations of our diplomatic, military, and intelligence teams, I have authorized the deployment of approximately 5,000 U.S. troops to make sure we can have an orderly and safe drawdown of U.S. personnel and other allied personnel, and an orderly and safe evacuation of Afghans who helped our troops during our mission and those at special risk from the Taliban advance.

Second, I have ordered our Armed Forces and our Intelligence Community to ensure that we will maintain the capability and the vigilance to address future terrorist threats from Afghanistan.

Third, I have directed the Secretary of State to support President Ghani and other Afghan leaders as they seek to prevent further bloodshed and pursue a political settlement. Secretary Blinken will also engage with key regional stakeholders.

Fourth, we have conveyed to the Taliban representatives in Doha, via our Combatant Commander, that any action on their part on the ground in Afghanistan, that puts U.S. personnel or our mission at risk there, will be met with a swift and strong U.S. military response.

Fifth, I have placed Ambassador Tracey Jacobson in charge of a whole-of-government effort to process, transport, and relocate Afghan Special Immigrant Visa applicants and other Afghan allies.

Our hearts go out to the brave Afghan men and women who are now at risk. We are working to evacuate thousands of those who helped our cause and their families.

That is what we are going to do. Now let me be clear about how we got here.

America went to Afghanistan 20 years ago to defeat the forces that attacked this country on September 11th.

That mission resulted in the death of Osama bin Laden over a decade ago and the degradation of al Qaeda.

And yet, 10 years later, when I became President, a small number of U.S. troops still remained on the ground, in harm’s way, with a looming deadline to withdraw them or go back to open combat.

Over our country’s 20 years at war in Afghanistan, America has sent its finest young men and women, invested nearly $1 trillion dollars, trained over 300,000 Afghan soldiers and police, equipped them with state-of-the-art military equipment, and maintained their air force as part of the longest war in U.S. history.

One more year, or five more years, of U.S. military presence would not have made a difference if the Afghan military cannot or will not hold its own country.

And an endless American presence in the middle of another country’s civil conflict was not acceptable to me.

When I came to office, I inherited a deal cut by my predecessor—which he invited the Taliban to discuss at Camp David on the eve of 9/11 of 2019—that left the Taliban in the strongest position militarily since 2001 and imposed a May 1, 2021 deadline on U.S. Forces.

Shortly before he left office, he also drew U.S. Forces down to a bare minimum of 2,500. Therefore, when I became President, I faced a choice—follow through on the deal, with a brief extension to get our Forces and our allies’ Forces out safely, or ramp up our presence and send more American troops to fight once again in another country’s civil conflict. I was the fourth President to preside over an American troop presence in Afghanistan—two Republicans, two Democrats. I would not, and will not, pass this war onto a fifth.