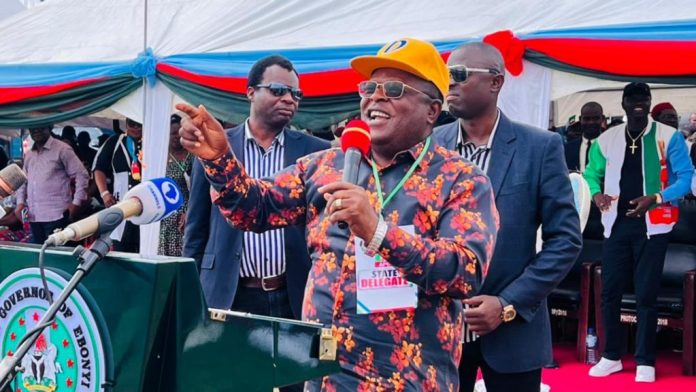 1. We are seized of the copy of the trending fabrications and fake news being circulated by one Linus Okorie and Charles Otu, published in different social media platforms and credited to and authored by People’s Democratic Party,PDP Ebonyi State Chapter and one Nkemakolam Okoro SC Esq respectively, on the above subject matter and the unfounded, cruel and malicious allegations contained therein.

2. We state in strong terms that the entirety of the content of the trending petition addressed to EFCC is absolutely and irresponsibly false, malicious and nothing but a serial of the politically calculated attempt by People’s Democratic Party, PDP and desperados to damage the hard -earned reputation of the Governor and the integrity of the State Government and to attack the credibility of the outcome of the dispensations of all institutions involved in ensuring that justice is done in all the legal actions framed up by PDP to distract the ever performing administration of Governor Umahi, especially to cause him distractions in his intention to run for the Presidency come 2023

3. We further categorically state that the petitioners acted libelously and unruly in their contentions on the status of judgement- effect in the matter of defection between PDP and the Governor of Ebonyi State as it is not in doubt that His Excellency, Engr Chief David Nweze Umahi FNSE FNATE is the subsisting Governor of Ebonyi State both in law and in fact.

4. We rebuke the allegations of ‘looting of Ebonyi State Government’s money’ made by People’s Democratic Party, PDP against our transparent administration as a satanic blackmail that has no iota of truth, desperately calculated to attract the attention of the gullible and sully the reputation of the Governor of the State and which we shall not hesitate in invoking legal actions to bring the petitioners to justice.

Ebonyi State Government’s expenditure is in the public domain, and there is no doubt that Governor Umahi’s administration has been adjudged to be one of the most transparent, judicious prudent and corrupt-free administrations in Nigeria.

5. Further in this regard, Ebonyi State Government is requesting the State House of Assembly to waive its constitutional immunity and request Economic and Financial Crimes Commission (EFCC) to within 30 days, investigate all the issues in the allegations contained in the petition by PDP and any other allegation of financial impropriety raised by them and to please cause necessary sanctions against the petitioners for false and fake information if their allegations are not established.

6. We must note that we are aware of the sponsors of this heinous petition, particularly Sen. Anyim Pius Anyim and we shall soon expose his complicity in these senseless fabrications. We have not forgotten his usual style of fight against a siting Governor in his State; we have not forgotten his history and cases of massive financial misappropriation and wrecking of national treasury and his land grabbing commitments in parts of the Country including grabbing of thousands of acres of land at the Centenary City, belonging to Federal Government some of which are under serious investigation by EFCC and other Anti- graft agencies.

We are fully aware of the unprofessional conduct and ambulance chasing character of his surrogate who authored this petition on behalf of PDP.

We know that he has been in the business of unprofessional conduct and dirty dealings and we assure him that we shall deal conclusively with this unfounded allegations to further expose his professional impropriety.

7. Members of the public are please enjoined to discountenance this trending petition as one of the series of lies from the forces who are intimidated by the rising and acceptable performance credentials of Governor Umahi.