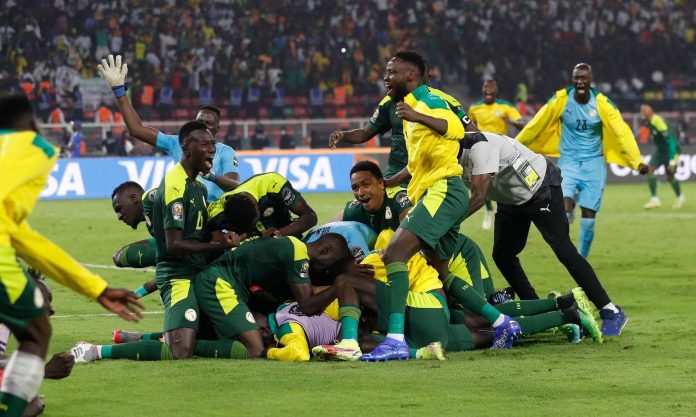 The Senegalese national team on Sunday defeated Egypt to win the 2021 Africa Cup of Nations (AFCON).

The pulsating and energy-sapping encounter was decided via penalties after a goalless 120 minutes.

Four minutes into the game, Senegal had a great opportunity to take the lead. Saliou Cisse made a fine run off the ball and chipped it over Emam Ashour, after which he darted into the box. Mohamed Abelmonem was caught on his heels and he brought down the left-back.

Egyptian goalkeeper, Abou Gabal Gabaski, denied Sadio Mane from the penalty spot. The Liverpool man elected for power and smoked it down the middle. Gabaski dived to his right, got his hands to the ball and palmed it away.

Minutes later, Ismaila Sarr put another dangerous cross into the box. Emam Ashour threw himself at the ball but missed it, and although it fell to Mane, the Liverpool attacker couldn’t control it as it bounced out of the penalty area.

Mo Salah, who had just a few chances throughout the game, eventually found himself in possession on the right wing.

He went on a brilliant run into the box, shaking off a couple of tackles and avoiding four defenders before rolling the ball onto his left foot and firing off a shot. Edouard Mendy dropped to his left and smothered the ball to deny the Egyptian captain an opener.

Apart from Sadio Mane missing a penalty, the game played out as predicted in the first stanza. Senegal were more aggressive, creating a lot more chances.

In the second half, the pattern did not change. Senegal’s attack repeatedly came agonisingly close to scoring the first goal but they were always denied by the Egyptian shot-stopper.

At full time, it ended in a goalless draw, sending the game to extra time — and with the stalemate remaining unchanged after an added 30 minutes, penalties were needed.

The Teranga Lions held their nerve to win 4-2 on penalties, with Sadio Mane netting the decisive kick.