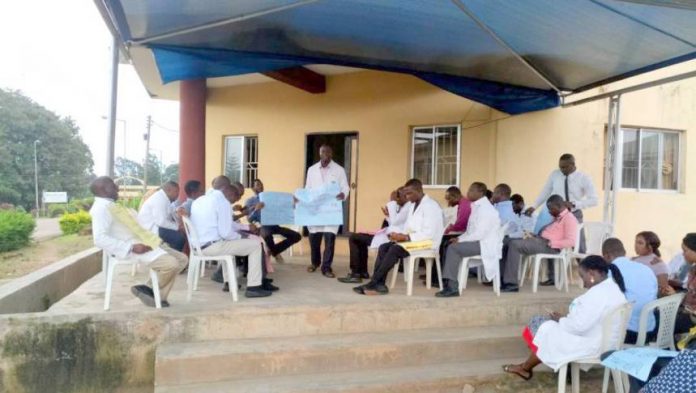 The Senior Staff Association of Universities Teaching Hospitals, Research Institutes and Associated Institutions (SSAUTHRIAI) has issued an ultimatum to the federal government to pay arrears of hazard allowances owed its members.

According to NAN, the association said this on Thursday in a communique signed by Kabir Mustapha, its acting chairman, after a two-day meeting in Calabar.

The association said despite writing several times to the federal government, the payment of their arrears has been delayed.

SSAUTHRIAI added that it could no longer guarantee continued services if its members were not paid all the arrears within one week.

On the COVID special allowance, the association asked the federal government to pay the balance of 40 percent, being two months owed its members.

“We demand the payment of 40 percent balance of remaining two months to our members who were erroneously paid 10 percent,” the statement reads.

“Also, the association notes with dismay the rate at which health workers, especially professionals, are migrating out of the country for greener pasture.

“This is due to the poor condition surrounding our health facilities, no consumables for health workers to work with, and a poor welfare packages.”

The association also called on the federal government to, as a matter of urgency, implement the September 30, 2017 agreement on adjusting the Consolidated Health Salary Structure, (CONHESS).

It also asked government at all levels to make remittances of deducted but unremitted funds to the unions and cooperatives without further delay.