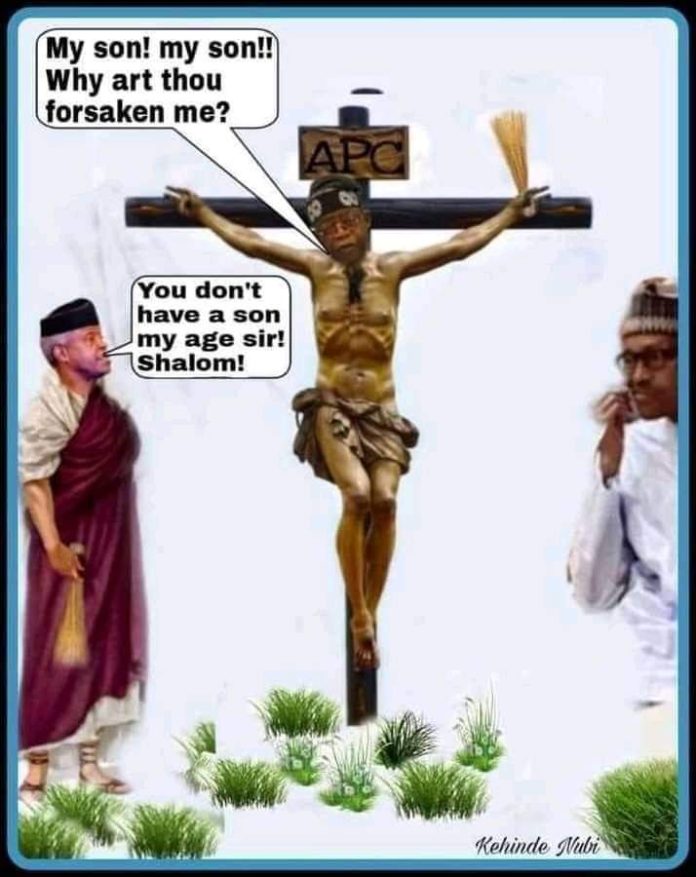 No empire lasts forever. History is filled with examples of even the most powerful empires that have crumbled either due to implosion or explosion.

As powerful and formidable as the Roman, Carthage, Assyrian, Persian, and Babylonian empires were, they all crumbled due to their inability to withstand sustained pressures or currents.

Therefore, no empire – no matter how formidably built – is too big or powerful to crumble.

Just like the great empires of old, the political empire of Asiwaju Bola Tinubu, former Governor of Lagos state is crumbling right before our eyes.

Yet, he thinks or he is deluded to believe that he is waxing stronger politically.

This was exactly what the captain of TITANIC – the biggest ship in the early 20th century – thought.

He was quoted to have said the ship was too big to sink that even God will not allow it to wreck. As though by some stroke of fate, that night, the ship sank and that was the last time it saw the sun.

Tinubu’s supporters have told everyone who cares to listen that he single-handedly installed the current administration of All Progressives Congress (APC) in 2015.

To them, he is politically invincible. Tinubu’s empire, to them, is waxing stronger when it’s actually crumbling.

Nobody is telling him just yet or truthful enough to him that the ground has shifted beneath him since 2015 when he thought to overstretch his so-called empire.

In 2015, in trying to prove his political invincibility after the presidential election, he thought about gaining control of the leadership of the National Assembly.

Controlling the National Assembly, he thought, will strengthen his hands to control the APC-led administration.

Of course, we all know how the June 2015 NASS leadership election went. Like Napoleon’s 1812 invasion of Moscow, his ego suffered badly.

The signs were clear, but he whom the gods will kill, he first makes blind!

The emperor of a crumbling empire later took his sights to Kogi state. The APC had a bright chance of winning the Kogi gubernatorial election in 2015.

Former Governor Abubakar Audu won the party’s ticket and Tinubu lobbied for one of his boys, James Faleke, a member of the House of Representatives representing Ikeja, Lagos to be Audu’s running mate.

Tinubu knew about Audu’s failing health. So, he thought with Faleke he would effectively get to control Kogi.

As fate will have it, Audu died just before the elections were concluded with APC in clear lead. The debate as to who inherits his votes arose.

It was up to the APC leadership to decide. Tinubu’s boy Faleke was everywhere insisting he should be the one to inherit Audu’s vote being the running mate.

The law was clear on the matter that the votes should go to the runner up in the APC primary.

This was how the party picked Yahya Bello, the current Governor of the state. Tinubu again left Kogi empty handed.

Desperate for a victory to boost the morale of his supporters, his sights were in Ondo state. Ondo state has a history of resisting emperors.

This explains why Ondo was never under the Oyo Empire. While Benin conquered Akure, it soon declared its independence in the 1890s. Emperor Tinubu thought he could subjugate Ondo state in 2016.

He tried imposing Olusola Oke (formerly of the People’s Democratic Party, PDP) as the APC gubernatorial candidate against the more tested and independent-minded Rotimi Akeredolu who was the party’s flag bearer in 2012 under ACN.

Akeredolu won the APC ticket against all Tinubu’s treacherous scheming. Oke later went to the Alliance for Democracy (AD).

Well, as history will have it, APC won the election without Tinubu.

In fact, some analysts think ACN’s Akeredolu would have won the gubernatorial election in 2012 if not for too much of Tinubu’s influence.

Tinubu did not realize how much of a political liability he had become in the scheme of things.

In 2018, he tried to control Ekiti state. His least favoured candidate, Kayode Fayemi, won both the APC primary and the election.

Tinubu was again humbled. He largely kept a safe distance from the state. Fayemi realized he does not need baggage like Tinubu for his 2018 campaign after his 2014 fisco.

In Osun state, Tinubu deployed all measures he had. He could not afford to lose Osun, his home state.

He insisted on his cousin, Gboyega Oyetola, becoming APC’s flag bearer. Despite being the ruling party in the state, APC struggled to retain a state that is naturally a Progressives’ fortress.

Even with “almighty” Tinubu spending his very last blood.

The signs of his crumbling empire began showing after the Osun Governorship election. His erstwhile lieutenant, Rauf Aregbesola, largely fell out with him.

To spite his former master, he was appointed as Minister of Interior, after APC’s victory in the 2019 election. Tinubu has not found it funny ever since.

Nobody likes to be told the hard truths. It is understandable if none of Tinubu’s subordinates are telling him his political empire and fortunes are waxing stronger when in fact, it’s waning.

Tinubu is simply desperate to re-assert himself politically for relevance. The signs are getting clearer to him even though his core supporters are not getting the message.

He is contesting for president that he is sure to lose only to prove a point.

He is using the last remaining crumbs of his relevance to bully South-West Traditional Rulers to save his political fortunes.

He has visited a number of them. These Traditional Rulers – most of whom he helped install – don’t necessarily support his political ambition.

They are simply urging the Emperor to keep dancing in his “new clothes” when he is actually dancing naked!

Tinubu’s empire has long crumbled and 2023 would show just that.