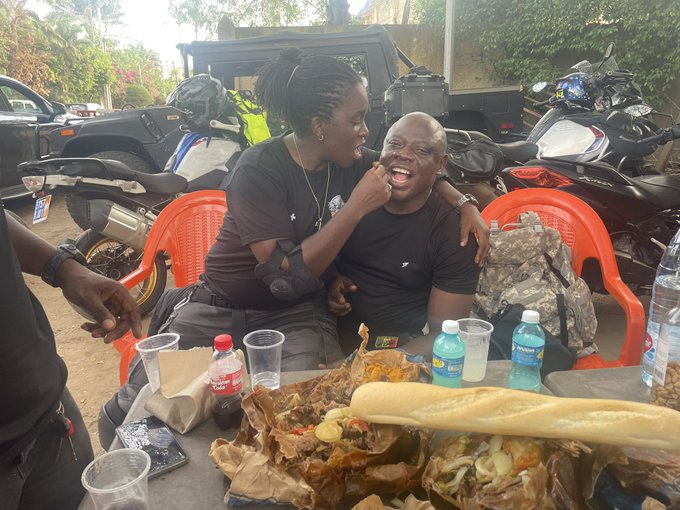 Three women of different nationalities have donated the total sum of $1,200 (approximately N500,000) to the charity fund of Kunle Adeyanju, a Nigerian man riding motorbike from London to Lagos.

The man who is on a cross country charity ride, made this known via his Twitter account as he revealed how much each of them gave him as part of a challenge.

According to Adeyanju, the first lady from Burkina Faso known as Miriam, challenged him to carry her and offered to donate $100 to his charity if he is able.

He carried out the challenge and shared photo proof, as he noted that she fulfilled her 100 dollar pledge.

Rotn Miriam threw a challenge at me… “if you carry me, I will donate $100 to the charity” and she did!

Pls throw your challenge at me and support the Charity fund and I will do my part.#EndPolio #LionHeart #LondonToLagos pic.twitter.com/w6cjkPAfMv

When the biker eventually got to Ivory Coast, a lady identified as Bambina also threw him another challenge that if he allows her sit on his lap and feeds him, she will donate 100 dollars.

He tweeted; ”At my reception by the Abidjan Bikers!

At my reception by the Abidjan Bikers!

Beautiful Bambina threw me a challenge, if you allow me to sit on your laps and feed you, I will donate $100 to the charity fund, and I agreed!#EndPolio #LionHeart #LondonToLagos pic.twitter.com/545r2Tsce1

Moving on from Abidjan, the capital of Ivory Coast, another lady, Zenab threw a similar challenge at him, but this time she donated $1,000.

Thank you Zenab for the $1,000 donation to the Charity fund …. I LOVE COTE D’IVORIE!#EndPolio #LionHeart #LondonToLagos pic.twitter.com/xVvUqrrcuu