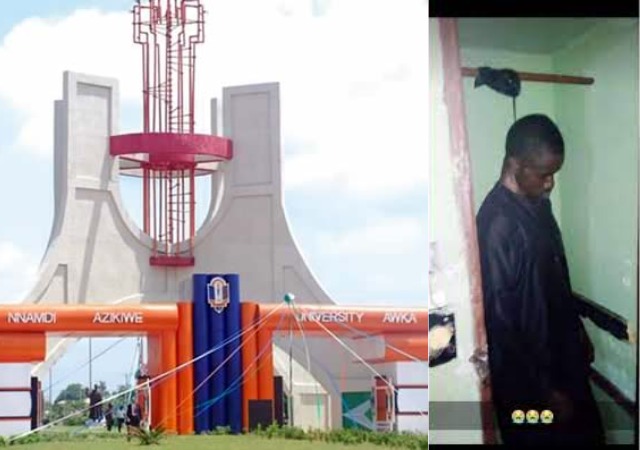 David Ogbonna, a 200 level student of the Nnamdi Azikiwe University, Awka, Anambra State, has reportedly committed suicide after seeing his last semester result, according to SaharaReporters.

It was learnt that the deceased, David Ogbonna, hanged himself in the university’s hostel wardrobe.

However, a source said no one had been allowed to get into the room where the incident took place, noting that the roommates of the deceased were being interrogated for further investigation.

Meanwhile, one of the deceased’s close friends stated that the family had issued an official statement that they would like to mourn Dave in peace.

“My dearest David Ogbonna, I got the news of your demise just this morning and it has left me devastated.

“I do not want to believe you took your own life until the management of Nnamdi Azikiwe University of Awka gives a concrete reason as to why this has happened.

“The family has issued an official statement that they would like to mourn Dave in peace. May God rest your merry soul, Dave,” he added.