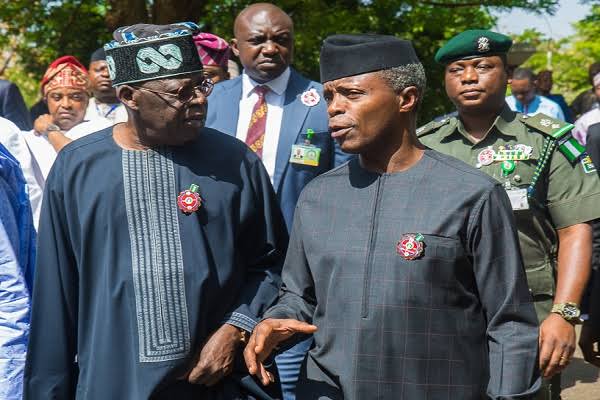 Worried about latest developments in the South-West ahead of the 2023 presidential election, some Yoruba leaders have begun moves to meet with Asiwaju Bola Tinubu, former Lagos State governor and presidential aspirant of the ruling All Progressives Congress (APC) over the declaration of Vice President Yemi Osinbajo, Daily Independent exclusively gathered.

A prominent chieftain in the South-West APC, who is aware of the development, informed Daily Independent that the move is being spearheaded by Chief Alani Akinrinade, a former Chief of Army Staff, and a prince from Ife who is the son of the late Ooni of Ife, Oba Adesoji Aderemi, popularly known as ‘Lanbua’.

According to him, the leaders are of the opinion that there is a need for the South-West to forge a common front by presenting a sole candidate from the region for the presidency as other regions may capitalise on the division to present a candidate who may eventually get the APC ticket.

He added that even before the formal declaration of the vice president to run for the presidency on APC platform last week, there has been a sharp division among his loyalists and those of Tinubu, a situation, he said, may not augur well for the South-West if not urgently addressed.

While some Tinubu’s former allies have come out to publicly identify with Osinbajo, others in Tinubu’s camp who are livid by the fact that the number two citizen wants to contest the presidency against his former boss and benefactor have accused him of betrayal, calling him names like Akintola and Judas.

However, our source said with the primary of the APC just few days away, some Yoruba leaders who are students of history do not want a repeat of the Dapo Sarumi and Femi Agbalajobi, both candidates of the Social Democratic Party (SDP), who were jostling to become Lagos State governor.

Squabbles by both aspirants for the party’s ticket and refusal to step down for each other led to their disqualification by the party which then presented another candidate, Yomi Edu.

However, the aggrieved supporters of the disqualified aspirants refused to vote for Edu and rather teamed up with Michael Otedola, the governorship candidate of the opposition, National Republican Convention (NRC).

Otedola won the election and became governor of Lagos State.

He said, “If you have been following developments in the South-West even before the declaration of the vice president, you will agree that there has been a kind of sharp divide between these two prominent sons of Yorubaland, Asiwaju Tinubu and Vice President Osinbajo.

Rather than close up, that gulf has been further widened when he announced his intention to run last week.

“Yes, I am aware that General Akinrinade, a highly respected elder statesman is championing the move and I understand that their mission is to ensure that the South-West doesn’t lose this golden opportunity due to in-fighting.

We understand that some people from other regions are watching with keen interests and even fanning the embers of these disagreement so that they can be the ultimate beneficiary while the South-West loses out.

“That is why General Akinrinade and the son of the former Ooni of Ife, popularly called Lambua in Ife, are going from place to place, identifying a number of Yoruba elders to try and go and talk to Asiwaju that there is no point dragging the issue of the primaries.

It is important to rally support for one of his men, who is Osinbajo.

They are also going to meet with prominent traditional rulers such as the Ooni of Ife, Alaafin of Oyo, Awujale of Ijebuland and others.

“They will also meet with prominent clerics in the region and other opinion moulders.

The essence of the meeting is how they are going to send a delegation to Asiwaju and advise him to support Osinbajo for the presidency.

If he agrees and given his vast network and influence, then it is a done deal for the South-West.

But given the mood of the nation, especially the youths and the body language of the presidency, it is largely believed that the South-West stands a chance with Osinbajo as APC presidential candidate”, he said.

When contacted on whether he is aware of the move, Tinubu’s media aide, Tunde Rahman, said there was nothing like that and nobody is talking to his principal to step down from the presidential race.

Speaking with our correspondent, Rahman said, “That is absolute falsehood. There is nothing like that. Believe me. It is fake news”.

Also, speaking, Hon. Seye Oladejo, the Lagos State Publicity Secretary of the APC, said anyone asking Tinubu to step down does not mean well for the APC as such a person wants the party to present a weak presidential candidate that will be easily defeated by the opposition party.

“The 2023 presidential election is beyond Asiwaju. This is an election of the people.

Just imagine over 2,000 support groups clamouring for him to run and you think some leaders that we don’t know to enjoy that kind of followership can ambush him to just step down? It is unthinkable. No one should even come up with such a discussion”, he said.

In a related development, a chieftain of the ruling APC and former National Publicity Secretary of the defunct Congress for Progressive Change (CPC), Rotimi Fashakin, on Sunday said anyone accusing Vice President Yemi Osinbajo of betrayal for coming out to contest the 2023 presidential election should be ignored.

While vouching for Osinbajo’s loyalty and integrity, Fashakin in an interview with Daily Independent, said Osinbajo sought the support and got the blessings of Asiwaju Bola Tinubu, his former boss, during his tenure as Attorney- General and Commissioner for Justice in Lagos, before announcing his declaration last week Monday.

Since Osinbajo’s declaration that he will contest the 2023 presidential election on APC platform, some loyalists of Tinubu have described him as Judas who betrayed Jesus Christ while others called him the ‘modern day Akintola who betrayed Awolowo’ in reference to the 1962 Action Group crisis which was a result of the struggle for power between two political leaders of the Western Region and Action Group (AG), Chief Obafemi Awolowo and Chief Samuel Ladoke Akintola.

However, Fashakin said such conversation shouldn’t be taking place among serious Nigerians as what should be paramount now is electing a leader with the capacity to make the country better and secure for all.

“That conversation has been going on in certain quarters and I don’t think that is something anybody should countenance or advance.

I believe, the Vice-President, Prof. Yemi Osinbajo has gone to Asiwaju himself to seek his blessing and support to contest the 2023 presidential election. That for me ends it all.

“Having done that, he has decided to throw his hat into the ring bearing in mind also that Asiwaju too is contesting on the same platform.

In doing so, he has not denied the leadership of Asiwaju and how he gave him the opportunity to serve as his Attorney-General and Commissioner for Justice which was very vital for him and the government of Lagos State.

He really proved his mettle and it was because of his pedigree that he was identified in the first place.

“So, anyone describing him as a betrayer should just be ignored.

That shouldn’t be a serious conversation that we should be having at this point in time.

What we should be concerned about at this point in time is, who has the capacity and ability to transform Nigeria”.