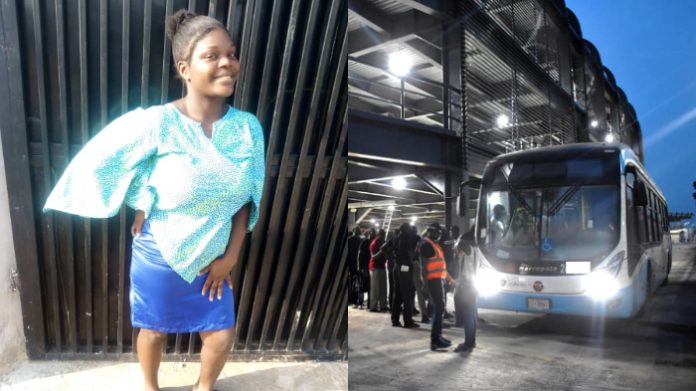 A young Nigerian lady identified as Bamise Ayanwole has been declared missing after using the popular Bus Rapid Transit (BRT) while returning from work in Lagos on Saturday.

The reported disappearance and the circumstances said to be surrounding the incident is casting doubts on the safety of BRT buses in Lagos.

Bamise, according to Twitter user @Mercy_Mcquin, was returning from work at about 7 pm when she got on a BRT bus at Chevron (Lekki) en route Oshodi.

The bus with the number 240257 was later seen at a BRT terminal but neither the driver nor Bamise could be found, preliminary investigations show.

“She was coming from Lekki Chevron where she works. She entered the BRT bus from Chevron going to Oshodi around 7 pm on Saturday. She started to send voice notes when she noticed something was off about the bus,” @Mercy_Mcquin tweeted.

“The driver asked her to sit at the back of the bus. She agreed. On her way coming, the driver picked up two men and one woman. This made her (Bamise) calm for a bit. Then she told us she would alight at Oworonshoki. We called her and noticed something was off about the way she was talking. Then we tried to reach out to her again but her phone was unreachable.”

According to Mercy, Bamise’s family said the young woman neither got home that night nor had been seen since then. A video Bamise shared with friends showed the inner lights of the bus were switched off, something BRT buses driver are not known to do.

Concerned friends and family members reported the matter to the police who located the driver’s residence but were told he no longer lived there. The driver’s phone number was also switched off, Mercy said.

A call was made to Primero, the private organisation managing the BRT buses but no response was gotten.

Primero Transport Services Limited is the sole operator of the Ikorodu-TBS BRT corridor, with additional routes to Ikeja, Oshodi and Yaba. It also operates along the Oshodi-Abule-Egba corridor.

They are reportedly cooperating with the police and Bamise’s folks. The Lagos State Government has also been urged to get on top of the matter.