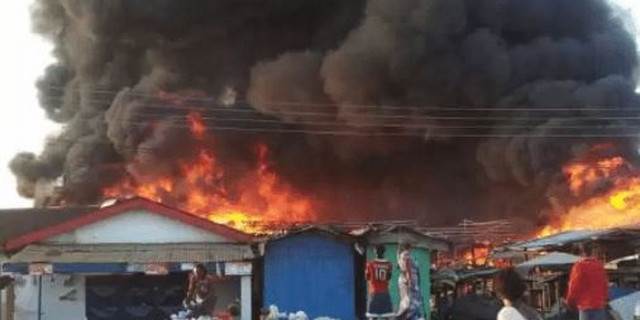 Fire on Tuesday evening destroyed property worth millions of Naira at a footwear company near Amuwo Odofin area of Lagos, the News Agency of Nigeria (NAN) reports.

A worker at the factory, who pleaded anonymity, told NAN on Wednesday that the fire started at 5:00pm on Tuesday as a result of electrical fault on one of the machines in use.

He said that sparks from the machine triggered the fire which caught some materials around the work area of the machine.

“Though fire extinguishers were mounted around the work area, a careless attempt to put out the fire with of water caused the fire to spread to other parts of the warehouse,” the worker said.

NAN also observed that the fire gutted four warehouses used by the company.

Meanwhile, workers of the footwear factory expressed worry that payment of their May salaries was now uncertain due to the unfortunate incidence.

As at the time of writing this report, no official statement had been issued by the agencies concerned as regards the inferno.