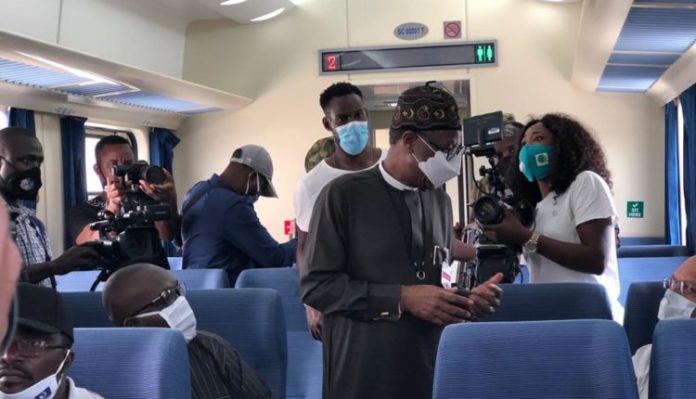 Lai Mohammed, minister of information, says the federal government has performed excellently in the provision of infrastructure.

He said this yesterday at a media briefing in Abuja.

According to him, the federal government has done well on ensuring safety via rail transport.

“We are proud that in our time, Nigerians are once again able to travel by rail, this time in total comfort and safety,” he said.

“Lagos-Ibadan, Abuja-Kaduna, Warri-Itakpe-Ajaokuta and Abuja Metroline are shining examples of our rail revolution. And we are just getting started. We have the rehabilitation of the Port-Harcourt-Maiduguri Eastern Narrow Gauge Railway project that cuts through Rivers, Imo, Anambra, Benue, Enugu, Ebonyi, Gombe, Yobe, Adamawa and Borno states, and the Bonny Deep Sea and Railway Industrial Park.

“We have the Kano-Maradi standard gauge line that passes through some economic hubs of the country, including Kazaure, Daura, Katsina and up to the border town of Jibiya and the city of Maradi in Niger Republic.”

Earlier this month, a Lagos-Ibadan train stopped mid-way after reportedly running out of diesel.

Speaking further at the media briefing, the minister said the country is becoming safer with the successes being recorded in the fight against insurgency and banditry.

“I am proud of our security forces, our men and women in uniform. Despite a myriad of security challenges, they are living up to the billing. The recent string of successes recorded in the fight against Boko Haram and ISWAP is uplifting,” he said.

“The procurement of modern platforms for the armed forces has also gone a long way in raising the level of their operational readiness and efficiency, in addition to boosting their capabilities.”