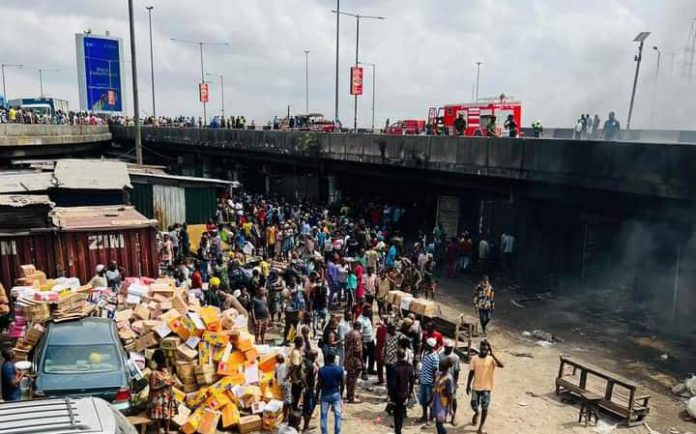 Babajide Sanwo-Olu, governor of Lagos, says structures under the bridge in the Apongbon area of the state will be demolished if traders refuse to vacate the area.

Following a fire outbreak in the area on March 23, the federal government had ordered traders doing business under Lagos bridges to vacate before March 31 or face forceful eviction.

However, Sanwo-Olu said despite the order, traders have continued their business under the bridge.

According to a statement issued on Sunday by Gboyega Akosile, his chief press secretary, the Lagos governor issued a three-day ultimatum to the traders to vacate the area, otherwise, the structures would be demolished.

“Governor Babajide Sanwo-Olu, on Sunday, issued a three-day ultimatum to traders under the Apongbon bridge in Lagos Island to vacate or risk demolition of the space by Wednesday this week,” the statement reads.

“He gave the warning while driving on the bridge during his inspection of the blue line rail project and saw that traders were back under the bridge with their goods displayed after they were driven away in the aftermath of the fire outbreak under the Apongbon bridge about six weeks ago.

“Governor Sanwo-Olu, who frowned at the unlawful return of the traders under Apongbon bridge, said the enforcement team would be deployed to the bridge after the three days’ ultimatum issued.”