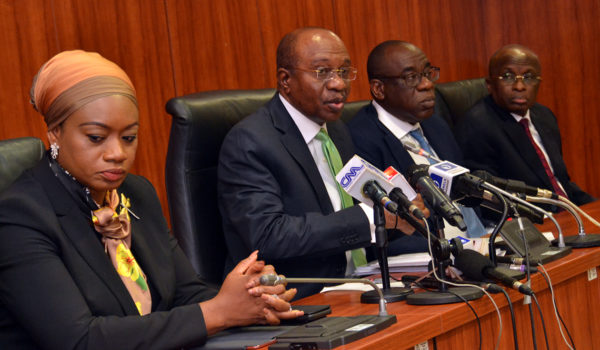 As fear grips the world about a likely global recession, economists and analysts looking to assess the state of the Nigerian economy are struggling to rely on data to predict the country’s economic growth.

Nigeria is showing signs of a country in distress following the rising cost of goods and services, depreciating currency value, and decline in purchasing power. But to get a better grasp of what is going on, one of the most reliable data is no longer in the public domain.

The PMI Survey report, which is a monthly index that indicates the changes in the level of business activities in the current month compared with the preceding month, helps to give an indication of how the economy is performing on a monthly basis. The report is divided into two components, the manufacturing and non-manufacturing PMI.

The manufacturing PMI states the direction of the performance of the sub-sectors in the manufacturing sector, ranging from cement, metal, chemical products, up to food production. The breakdown also shows production level, new orders, employment level, purchases, input, and output.

Although, the apex bank has been reporting the indices in their regular Monetary Policy Committee (MPC) communique, it is impossible to know the factors that are driving the growth or decline in business activities in the country, either in the manufacturing or non-manufacturing sector.

The survey is conducted by the Statistics Department of the Central Bank of Nigeria, with respondents being purchasing and supply executives of manufacturing and non-manufacturing organizations in all 36 states in the country including the Federal Capital Territory (FCT).

The purchasing managers’ index is usually released on the last day of the month, before the apex bank discontinued the publication in December 2020. Although the bank did not give reasons for these, the discontinuation limits the ability of analysts and economic enthusiasts to predict the direction of the economy at every point in time.

This is especially critical in a world going through unprecedented levels of inflationary pressure, and economic uncertainties. It is imperative for more details to be available beyond the quarterly Gross Domestic Product (GDP).

CBN Has Stopped Publishing Data That Is Used For Predicting Recession

A look at other times when the Central Bank’s PMI report has adequately shown the direction of the economy during a recession. In the first quarter of 2016, when Nigeria’s GDP contracted by 0.67%, which eventually led to five consecutive quarters of GDP contraction till Q1 2017, the manufacturing PMI averaged at 46.2 index points.

The manufacturing PMI dropped from 51.2 index points recorded in December 2015 to 47.2 points in January 2016, maintaining an index point below the 50% threshold all through the year.

Similarly, the non-manufacturing PMI dropped from 53.4 index points recorded in December 2015 to 46.9% in January 2016, largely due to decline in employment, inventory, new order business activities during the period.

Similarly, in 2020 when the nation’s real GDP contracted for two consecutive quarters (Q2’22: -6.1% and Q3’20: -3.62%), the manufacturing PMI declined to 42.4 index points in May and stayed below 50 index points all through the two quarters. The same was witnessed in the case of the non-manufacturing PMI during the second recession.

While recent numbers from the CBN suggests a looming recession (April’22, 48.9 and 49.1 index points for manufacturing and non-manufacturing PMI respectively), the PMI report would have shown key areas that contribute to the decline or increase in economic activities.

However, it is unlikely that the true state of the country’s economy can be predicted given limited timely data.