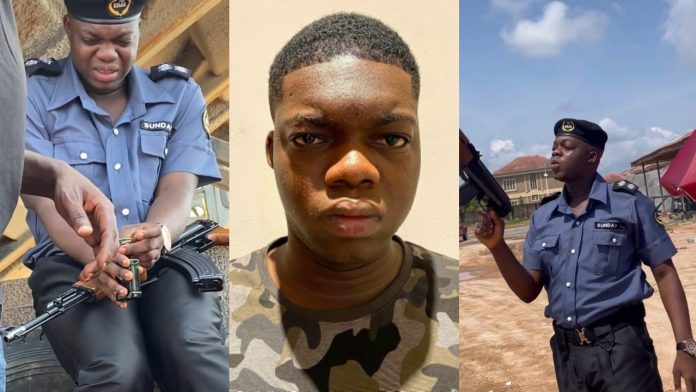 The Nigerian Navy has said that naval personnel and online comedian, Abdulgafar Ahmad, aka Cute Abiola, is currently being detained for posting a video of himself in military uniform on social media, an act which is in violation of the armed forces’ social media policy.

In an interview with Saturday Beats, the spokesperson for the Nigerian Navy, Commodore Suleiman Dahun, said, “There is an armed forces social media policy that was promulgated by the defense headquarters, and its principal regulation is that military personnel should not post photos or videos of themselves in uniform while engaging in personal or official activities.

Speaking on what Abiola did to warrant his punishment, Dahun said, “When we got the clip wherein he violated the policy, we asked him to come back to explain himself but he did not return. His commanding officer called him to explain himself concerning the video clip but he ignored his commander and didn’t return until his leave was over. When he returned, he was put in custody. If he had come back when he was called upon to explain himself, we would not be discussing this. We (the military) are not in an animal farm. We are human beings too but laws have to be obeyed.”

Concerning whether military personnel were allowed to be in the entertainment industry, a top source in the Navy, who spoke on the condition of anonymity, said, “Entertainment is a form of business and even the civil service does not allow its officials to have a side business. Ahmad would be tried first and if found guilty, he would get his due punishment. People should stop taking Panadol for someone else’s headache.

The case will be handled administratively. It is an internal family matter, and it will be resolved. If a young person misbehaves, we have a way of correcting him in a gentle manner so that he would not repeat such or do worse. We understand that he is an entertainer with a large followership on social media and he can be useful to the military.

He is not a stubborn person but he was not supposed to show himself in military uniform on social media. If he had obeyed simple instructions, this wouldn’t have happened. He only exhibited juvenile delinquency. He would get his due punishment, (which would be) a light one, not something hard.

We recognise that he is an entertainer and he could even be given an opportunity to showcase his talent during (social) events of the Nigerian Navy or the Armed Forces. There are two major reasons we are uncomfortable with our personnel exhibiting themselves on social media, and one of them is for their personal safety and security.

“It is not advisable for military personnel to make their addresses and whereabouts known to the public because (through that), our adversaries can get information about the military. A person’s location can be known from the background of the pictures they post on social media. Even Boko Haram terrorists cover their background whenever they post videos of their activities, so that security agents would not be able to pinpoint their location.”