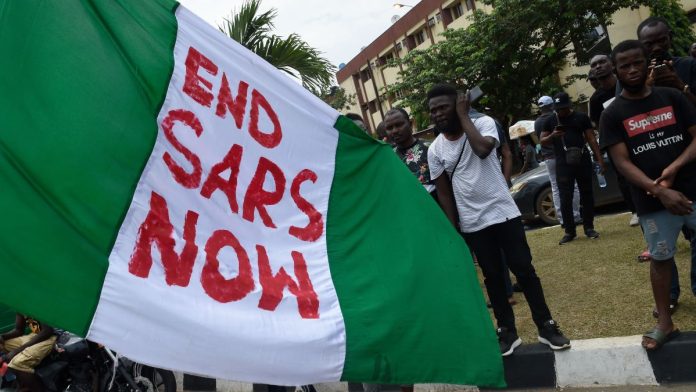 This is my review of the events that led to what has been described as “The Lekki Massacre.” I have written this for those who still have genuine hope in our country, Nigeria, despite its many and perennial failures; for those who are willing to humble themselves and learn from the series of events that transpired and to understand what could have been done differently; for those who are not political jobbers seeking personal agenda or relevance from what was a fundamental departure from how protests were organized in the country and how it could have led to a new dimension in citizens-government engagements; and finally, for those youths who need to know that sufficient knowledge and understanding of how systems work is very is the foundation of change.

While this is not an attempt to be a judge over an event so sad and complex, I aim to bring out the faults especially from the side of the protesters as that is my constituency but not without pointing out what the government did wrong.

Furthermore, this is not an attempt to force you to believe my opinion, neither is it an attempt to change the opinions of those who are biased, whose minds are incapable of holding separate views and ideas on issues. I desire that genuine and informed conversations begin to happen in respect of how we move forward as a people, on how we can wrestle our country from the jaws of the soulless and wicked political class.

End Police Brutality or EndSARS?
The spontaneity, commitment, and coordination of the protests is something that deserves the highest commendation and even though a lot of mistakes were made, and the events eventually turned deadly, we must continue to highlight the unity of purpose displayed by Nigerian youths during the protests. However, the labeling of the protests as such is the first fault that might have unknowingly impacted the outcome of the protests.

In random and reactionary protests like the EndSARS and giving the platform that drove most of the engagement, labeling accurately might have been a very tough task. Understandably, ENDSARS was convenient, but it didn’t convey the broader demand of the protests which was about ending Police brutality.

This in my opinion was the genesis of the endless shifting of goalposts by those who were loudest during the protests. When the government responded to the 5-point demand of the protesters and disbanded SARS, people did not find this acceptable because they realized that not much was going to change. If demands are not well thought out and articulated victory might appear insufficient and leave agitators dissatisfied.

Leaders and Coordinators are necessary even in decentralized protests
While this is not an attempt to excuse violence and abuse of human rights, it is important to highlight the flaw in the decision of the individuals who assumed leadership of the protests to not make themselves available for negotiation/talks with the government. This was the most critical decision that triggered the collapse of the movement and threw away all the gains made by the protests.

A critical review of the mindset behind this strategy shows what has always plagued us as a people – Trust Deficiency. The protest leaders did not trust themselves not to be compromised and the people did not trust the leaders not to sell out.

This was the reason the protests had no exit strategy. Our society being a trust deficient one meant we could not even trust ourselves to follow through on a course without compromise. Interestingly, the only way to build trust is to trust, there are no two ways about it. It is a risk to trust someone you find untrustworthy, but they can only show they have become trustworthy if they are trusted again to prove themselves.

Moreover, the individuals who were the face of the EndSARS movement were focused more on operational issues than its strategic purpose. The protests offered an opportunity for a new set of leaders to emerge who could be involved in setting off reforms and policy change to a system that might have lacked the capacity to self-reform. The lack of belief, trust, and naivete meant the opportunity was lost and the protracted hard work of birthing change was aborted before it even got started.

Anger is never a strategy, and you must recognize when you have victory.
It is only in games like football that it is not usually over until it is over, even if the opponent is several goals or points behind and recovery is impossible. For boxing and kickboxing, once you knock out your opponent, you don’t continue to kick them, you immediately recognize your victory and start to celebrate.

It was obvious that after the government had agreed to the 5-point demand of the movement, it was time to recognize and celebrate victory, change strategy and move to the next phase of the war.

I believe the night of candlelight was a good time to call people of the streets, but then, the movement decided to continue into the following week. It was at this point the intention of the movement started to be questioned and the issue of the protests having been hijacked by politicians with agendas arose.

Recognizing the victory and changing strategy meant the leadership of the protests could have played a critical role in who was part of the panel that was to be set up by the states or at least be a key part of the panel across the states and would have been able to create an accountability group that would ensure progress was made.

Fake News, Ignorance and the Online Mob
Without going into much detail about the events that led to the protests and the countless number of research already carried out on how Twitter drives fake news, it will be insufficient to discuss the protests without looking at the impact of social media-driven fake news.

While social media, especially Twitter, offers a platform to generate the quickest awareness of issues globally, its use has continued to be irresponsible. Before and after the protests, a lot of information was shared without caring for facts, as people let their emotions determine their actions rather than the truth.

Two major information were shared that pushed the protests to the deadly (anti)climax, namely that the UN would take over Nigeria if protests continued for more than 30days according to the UN constitution; and that the Nigerian Military will never shoot if protesters sang the National Anthem and waved flags. It appeared that nobody stood to think about the veracity and logicality of that information.

Protesters did not even bother to question if there was anything like a UN constitution or if the UN had ever taken over any country before or the goal of the United Nations. Nobody stopped to ask, given the history of violent protests in Nigeria, if there was ever a time protesters resorted to waving flags and singing the national anthem to avoid being shot at.

There was no precedence but a combination of fake news and ignorance along with the rush to be the first with the news meant a lot of lives were endangered and exposed to needless military force. It appears there were individuals with coordinated effort to cause chaos but the multitude of the protesters did not realize this and let themselves be deceived into risking their lives needlessly.

If we desire true change as a people, we must not allow ourselves to be dissuaded and pulled away from focusing on the real issues by people with ulterior motives. We must take responsibility for what we share and be deliberate about what we believe and allow to drive our actions.

Office holders change but the (Nigerian) government never changes.
The handling of protests by the Nigerian Government raises a question about if a change of officeholders has a significant relationship with how it reacts to protests.

The violent reaction to the protest is not a peculiar case and one would ask why successive governments have always resorted to maximum force in dealing with the people. Response to largely peaceful protesters should never be violence; this is a lesson the Nigerian Military and Police must learn.

It is an irresponsible approach that must stop. One year after, it appears no lessons have been learned and the Nigerian government will still not hesitate to use brute force on its people. If you cannot protect the people you swore to protect, at least do not be the one to kill them.

While some have argued that some actions were necessary to keep the sovereignty and unity of the country, bringing live rounds to disperse protesters will always be unacceptable. The various forces must rethink and equip for non-forceful dispersal of protesters and continue to ensure Nigerians’ fundamental rights to protests are not taken away from them by bullets.

Final Words.
There are a few dimensions and issues that are not covered by this article due to their sensitivity, how they might be misunderstood, and divert attention from its goal which is to look at what we could have done differently as a people.

In as much as it appears gloomy that authorities may never be willing to give as much latitude to protesters as much as was given during the protests, we must continue to learn and engage and look at innovative and participatory ways to bring change to our nation.

We must understand that politics affect a lot of things and that politicians always look for opportunities to take advantage. We must understand the importance of being knowledgeable about how systems work if we seek to change them and verify the information we share. The destruction of lives and properties following the events of the 20th of October 2020 were avoidable if we had all acted more responsibly and understood the collective responsibility of keeping our country safe.

Kenny is a Banker, Financial Risk Manager and a Business Analyst who seeks to raise the knowledge and participation level in Nigerian politics.
Twitter:@mckenny