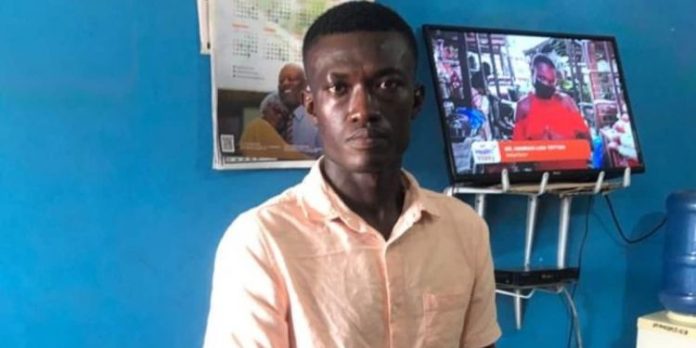 The Police in Ghana have arrested a footballer and sports commentator identified as Richard Gyamfi with 3 human heads and body parts in the Sunyani Municipality of the west African country.

According to reports, the sports commentator and footballer was arrested for murder.

According to the police, after a thorough search in his house, it was discovered that Richard Gyamfi was keeping three human heads packed in his refrigerator.

Confirming the news on a Sunyani-based Sky FM, the father of one of the deceased children, Thomas Agyei told the host that the footballer lured his 13-year-old child Louis Agyemang Junior from the football park ar Sunyani Abesim into his room and murdered him.

His father added that the efforts to find his son the same day he got missing proved futile. However, one of the friends of the deceased boy told his parents that he saw the sports commentator with the boy before he was pronounced missing.

Richard Gyamfi denied seeing the boy when he was approached about the missing boy. On the other side, the friend of the deceased insisted he saw Louis with Richard Gyamfi at the park. After further interrogation, he stated that his house keys were missing which rose suspicions.

The angry parents gathered some boys in the area who broke into the house of the footballer only to find the lifeless body of Louis Agyemang lying on the floor with his head slashed away. After the police came to the scene, they later discovered 3 heads packed in the fridge of the footballer. He has however been handed to the Bono Regional Police Command for further investigations.