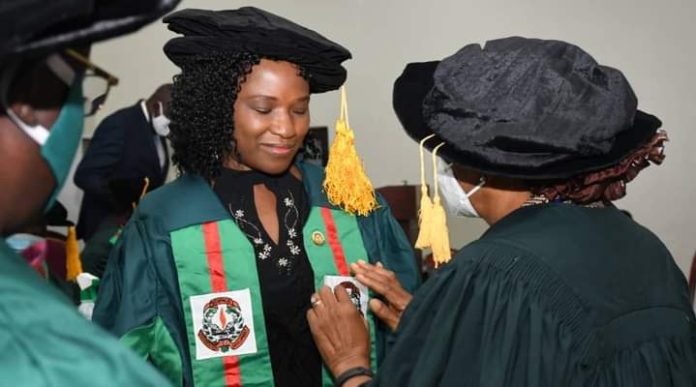 History was made in the 41-year-old Federal University of Technology Akure FUTA, Ondo State as the institution’s first female and the eighth substantive Vice- Chancellor, Prof. Adenike Temidayo Oladiji, was inaugurated.

Oladiji was appointed a Professor in 2011 after joining the services of the University of llorin in 1992. She is a Biochemist.

The University’s Pro- Chancelllor and Chairman, Governing Council, Ambassador Godknows lgali described the process of her appointment as methodical, thorough and transparent.

Igali while explaining the selection process, said: “Council shortlisted twenty (20) candidates out of the twenty nine (29) that applied for the position of the vice- chancellor in line with the stated criteria.

“The selection criteria were also strictly followed by the Selection Board to arrive at the three candidates based strictly on merit.

“It is indeed a well-deserved appointment. In a sector mainly dominated by the malefolks, it is highly commendable that you could prove your mettle and emerge at the top.

“You, therefore, need to hit the ground running and work assiduously to not only sustain, but improve upon the current rating of the university. You need to provide exemplary leadership and bring harmony among the various sectors of the university.

“You will have to surpass the achievements of your predecessors in terms of academic and infrastructural development. You must be able to bring your managerial abilities to the fore to harness available resources to achieve breakthroughs for the university on all fronts.”

Igali advising her on the welfare of workers said: “One question of great concern is the importance of according top most priority to welfare of members of the university community. The saying goes ’an incentivised worker is a productive worker,’ and vice versa.

“While I salute the great industry, service and accomplishments of all these other nine (9) women who are leading great universities, I have a conviction that female vice-chancellor number ten (10), Prof. Oladiji, will surpass every other person. It is, therefore, our sincere prayer that this appointment will be a fulfilling and a happy new chapter in your life and the life of our dear university.”

Responding in her inuagural address, Prof. Oladiji who described her appointment as divine, promised to “ensure that the gains of FUTA in the past years are sustained, improved upon, and evolve strategies to secure the future.

Oladiji while extending hands of fellowship to other co- contestants said: “My emergence is divine as only one person will serve as vice- chancellor at a time.