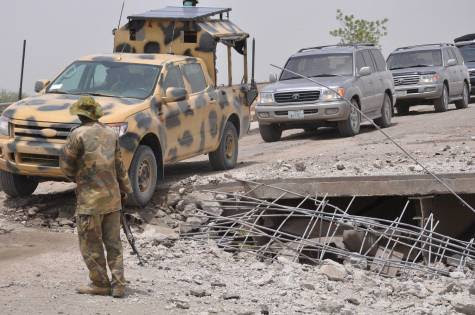 According to sources in the humanitarian community, the insurgents also burnt down the MOPOL station which served as a barracks, as well as the civilian JTF Outpost in the town.

“The insurgents drove into Damboa from Biu Road around 5.30pm yesterday in eight gun trucks and operated for over one hour.

“When they got into the town, they headed straight to the MOPOL barracks and started shooting indiscriminately. They killed two MOPOL and razed down the whole building. They also burnt down two MOPOL vehicles.

“Afterwards, they headed to the CJTF Outpost and set it on fire. They also burnt one vehicle of the CJTF,” the humanitarian source disclosed.

The source also revealed that the troops of the Nigerian Army repelled the attack but could not ascertain if there was any casualty on the side of the terrorists.