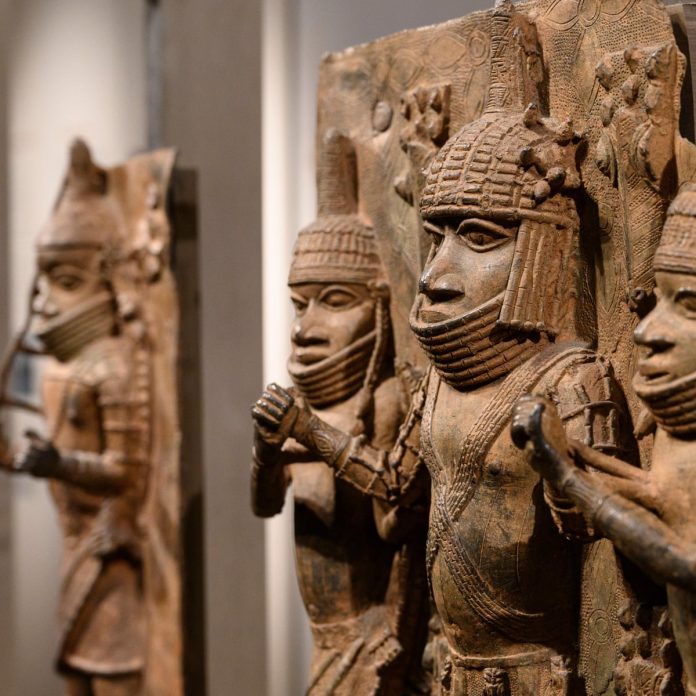 The federal government has recovered 31 Benin bronzes from three museums in the United States 125 years after they were stolen.

NAN reports that 29 artefacts were returned by the Smithsonian National Museum of African Art while one was recovered from the National Gallery of Art, and another from the Rhode Island School of Design Museum.

Lai Mohammed, minister of information and culture, and Abba Tijjani, director-general of the National Commission for Museums and Monuments, witnessed the transfer of the artefacts.

Aghatise Erediauwa, who represented the Oba of Benin, also witnessed the repatriation ceremony on Tuesday at the Smithsonian Institution in Washington DC.

Speaking at the event, the minister said: “We have also received or are in the process of receiving repatriated artefacts from The Netherlands, the University of Aberdeen in Scotland, Mexico, the University of Cambridge in the UK, and Germany, among others.

Nigeria Recovers 31 Looted Benin Bronzes From US, Germany To Return 1130

“Let me state clearly that Nigeria, as part of the global cultural heritage tradition, will not depart from the norms already established by practitioners in this field.

“Therefore, our museums will sustain the tradition of exchanges and collaborations with museums in the United States and other parts of the world.

“Their brave decision to return the timeless artworks is worth emulating.”

The minister said Nigeria has signed an agreement with Germany for the repatriation of over 1,130 looted Benin bronze artefacts.

He said Nigeria is getting positive responses from France and Mexico to also return stolen artefacts.

The minister said the world has realised that it is an ethical and moral issue to return the artefacts back to their owners.

“The standard response is that until the British parliament changes the status, they are not in position to do so.

“The US and Germany are now seeing that this matter is not of law but of morality, it’s about doing the right thing. I hope that the British government will also learn from the two countries and do same.”

The minister added that Nigeria is planning to sign an agreement with the UK on November 28 to return about 86 other artefacts from various museums in the country.