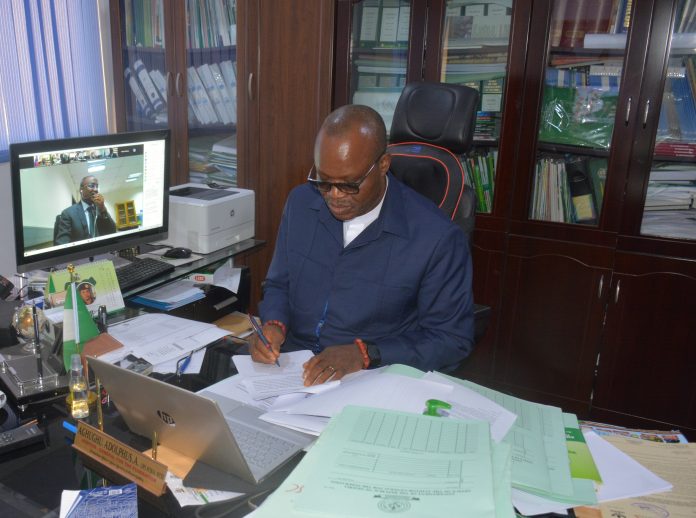 A house of representatives committee says the office of the accountant-general operates an analogue system.

James Faleke, chairman of the committee on finance, said this on Monday at an interactive session on the 2023-2025 medium-term expenditure framework (MTEF).

The Federal Road Safety Corps (FRSC), which was among the government agencies that appeared before the committee, disclosed its remittances for the period under review.

The corps said N1.5 billion has been remitted as of June 2022. The figure was confirmed by the Fiscal and Responsibility Commission.

But when Faleke asked Muhammed Saleh, director of federation account, office of the accountant-general, to also confirm the figure, he said it is N27 million.

Faleke said the FRSC record is more updated than the office of the accountant-general.

“Are you still using analogue in your office?” Faleke asked.

The lawmaker said the office of the accountant-general issued the receipts to FRSC of the remitted funds yet their records have not been updated because it is not automated.

“You are using analogue because you issued them the receipts; you gave them the treasury receipt,” he said.

“The problem you even have is that your receipts are handwritten. It should be automatically generated. You as director of funds sitting down here should be with your laptop. If I ask you a question you just point, show me and tell me what it is.

“Honestly I don’t know how we can work if we don’t have your support. As it is now, I am not getting your support. The committee wants to know what has been remitted by each agency as against their previous budget. We also what to see the audited report and then we determine how much they ought to have remitted along with fiscal responsibility. Then we postulate — that in 2023 the budget that has been given to them is adequate or low.”

The lawmaker further asked Saleh about the funds remitted by customs but he couldn’t provide an answer.

“No wonder this country is suffering from revenue leakages. The explanation that they (office of the accountant-general) consistently give to the parliament whenever we bring government agencies that generate revenue to run this country — will end up saying they will go and reconcile,” he said.

“Mr chairman, we are on one committee together — we docked the accountant-general. No wonder he is in trouble. You were chairman (of the committee), he couldn’t sufficiently answer some of our interrogations.

“Here, we have a country that is struggling with debt. Here we have institutions of well-educated people in the accountant-general office but yet they are not able to track our revenue.

Faleke said the office of the accountant-general has to automate its records to make tracking of revenue easy.

“If we are able to get more revenue from the agencies, the deficit will reduce. We have so many agencies that you ought to be taking the money online, automatically,” he said.