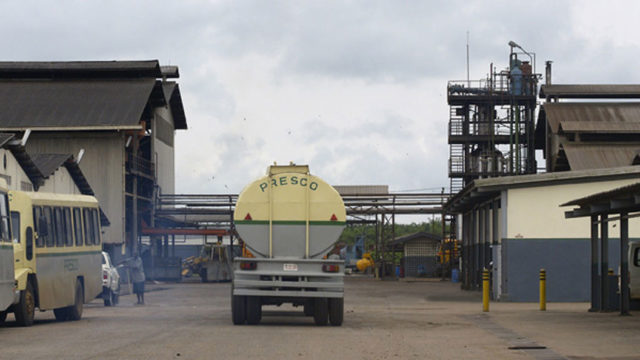 Presco Plc faces a tough task ahead in the second half of the year for its full-year profit target of N27.6 billion to be met. The oil palm and rubber producing company has realised N13.5 billion of that figure so far at half year and needs to generate over N14 billion profit in the second half to balance up.

The company’s forecast also shows a target sales revenue of N70 billion for the full year of which it generated N41.7 billion at the end of half year ended June 2022. Its half-year interim report shows that the company’s management is ably driving earnings growth for the second year albeit a slowdown in the second quarter.

A stronger profit expectation in the second half from a lower turnover than in the first half appears to place the profit forecast on the side of high optimism. For the company to earn profit that big in the second half, it has to convert nearly one-half of the expected revenue into profit. That will jerk up the profit margin from 32.4 percent at the half year.

Again, the second half is mostly the company’s off-season for palm products and both sales and profit usually slow down due to off-season effect. More than half of last year’s N19.3 billion profit was earned in the first half though the second half contributed close to 55 percent of sales.

This year’s slowdown in sales and profit started earlier than usual in the second quarter — which moderated the half year growth numbers. Turnover slowed down from a two and half times jump in the first quarter to 63 percent increase quarter-on-quarter to N22 billion in the second.

Three key expense lines of the company are gulping revenue this year and this is led by finance expenses, which multiplied 16.5 times to N2.4 billion in the second quarter.

Presco’s half year position shows a turnover of N41.7 billion at the end of June 2022, which is a strong growth of 94 percent year-on-year notwithstanding the slowdown from the exceptional growth in the first quarter.

The cost increases in the second quarter weakened profit performance in terms of converting revenue into profit. Cost of sales stood at over N11 billion at half year, representing over 132 percent rise year-on-year.

Input cost claimed an increased proportion of sales revenue at 27.5 percent compared to 23 percent in the previous year. The ratio is expected to rise further in the second half to stand at 30 percent at full year by the company’s forecast.

The increased incursion of cost of sales will slow down gross profit in the second half – when N18.7 billion is expected, down from N30 billion in the first half. Gross profit will expectedly decelerate from about 83 percent growth at half year to 53 percent at full year, closing at N48.7 billion according to forecast.

The company’s forecast shows an unusual expectation in respect of administrative expenses, which is expected to plunge from N8 billion for the first half to N1.7 billion for the entire second half, adding up to a full year forecast of N9.7 billion.

This means management will halt the high speed growth of over 187 percent in administrative expenses at half year and reduce it to less than 13 percent increase at full year. However it is going to do that, there hangs one of its cost saving hopes to build a bigger profit forecast in the second half.

With the cost savings, Presco plans to rebuild profit margin aggressively and deliver over N14 billion after tax profit in the second half.

The expected drop in finance expenses is despite the company’s enlarged balance sheet borrowings from N56.7 billion at the end of last year to over N65 billion at half year.