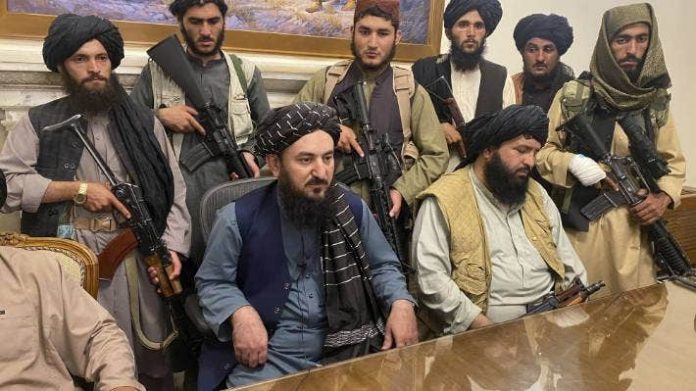 The Taliban effectively sealed their control of Afghanistan on Sunday, pouring into capital, Kabul, and meeting little resistance as President Ashraf Ghani fled the country, the government collapsed, and chaos and fear gripped the city, with tens of thousands of people trying to escape.

The insurgents’ return to power, two decades after they were ousted, came despite years and hundreds of billions of dollars spent by the United States to build up the Afghan government and its defense forces. In a lightning offensive, the Taliban swallowed dozens of cities in a matter of days, leaving Kabul as the last major redoubt of government control.

On Sunday evening, former President Hamid Karzai announced on Twitter that he was forming a coordinating council together with Abdullah Abdullah, chairman of the Afghan delegation to peace talks, and Gulbuddin Hekmatyar, the leader of the Hesb-i-Islami party, to manage a peaceful transfer of power. Mr. Karzai called on both government and Taliban forces to act with restraint.

As it became clear that Taliban fighters were entering Kabul, thousands of Afghans who had sought refuge there after fleeing the insurgents’ brutal military offensive watched with growing alarm as the local police seemed to fade from their usual checkpoints. The U.S. Embassy warned Americans to not head to the airport in Kabul after reports that the facility was taking fire, and said that the situation was “changing quickly.”

Late in Kabul’s evening, Mr. Ghani released a written statement on Facebook saying he had departed the country to save the capital from further bloodshed.

“Today I was presented with a hard choice,” he wrote. “I should stand to face the armed Taliban who wanted to enter the presidential palace or leave the dear country that I dedicated my life to protecting the past twenty years.”

At 6:30 p.m. local time, the Taliban issued a statement that their forces were moving into police districts in order to maintain security in areas that had been abandoned by the government security forces. Taliban fighters, meeting no resistance, took up positions in parts of the city, after Zabiullah Mujahid, spokesman for the Taliban, posted the statement on Twitter.

“The Islamic Emirates ordered its forces to enter the areas of Kabul city from which the enemy has left because there is risk of theft and robbery,” the statement said. The Taliban had been ordered not to harm civilians and not to enter individual homes, it added. “Our forces are entering Kabul city with all caution.”

As the sun set behind the mountains, the traffic was clogged up as crowds grew bigger, with more and more Taliban fighters appearing on motorbikes, police pickups and even a Humvee that once belonged to the American-sponsored Afghan security forces.

Earlier in the afternoon, Interior Minister Abdul Sattar Mirzakwal announced that an agreement had been made for a peaceful transfer of power for greater Kabul, and that his forces were maintaining security.

“The city’s security is guaranteed. There will be no attack on the city,” he said. “The agreement for greater Kabul city is that under an interim administration, God willing, power will be transferred.”

Mr. Mirzakwal later announced a 9 p.m. curfew in the capital, and called on its residents to go home.

Mr. Ghani left Kabul in a plane with his wife, Rula Ghani, and two close aides, and had arrived in Uzbekistan, according to a member of the Afghan delegation in Doha, Qatar, that has been in peace negotiations with the Taliban since last year. The official asked not to be named because he did not want to be identified speaking about the president’s movements.

“That the former president of Afghanistan has left the country and its people in this bad situation, God will call him to account and the people of Afghanistan will make their judgment,” Mr. Abdullah said in the video.

In negotiations being managed by Mr. Abdullah, Mr. Ghani had been set to travel to Doha on Sunday with a larger group to negotiate the transfer of power, but flew instead to Uzbekistan, the peace delegation member said.

Mr. Ghani had resisted pressure to step down. In a recorded speech aired on Saturday, he pledged to “prevent further instability” and called for “remobilizing” the country’s military. But the president was increasingly isolated, and his words seemed detached from the reality around him.

With rumors rife and reliable information hard to come by, the streets were filled during the day with scenes of panic and desperation.

“Greetings, the Taliban have reached the city. We are escaping,” said Sahraa Karimi, the head of Afghan Film, in a post shared widely on Facebook. Filming herself as she fled on foot, out of breath and clutching at her headscarf, she shouted at others to escape while they could.

“Hey woman, girl, don’t go that way!” she called out. “Some people don’t know what is going on,” she went on. “Where are you going? Go quickly.”

Wais Omari, 20, a street vendor in the city, said the situation was already dire and he feared for the future.