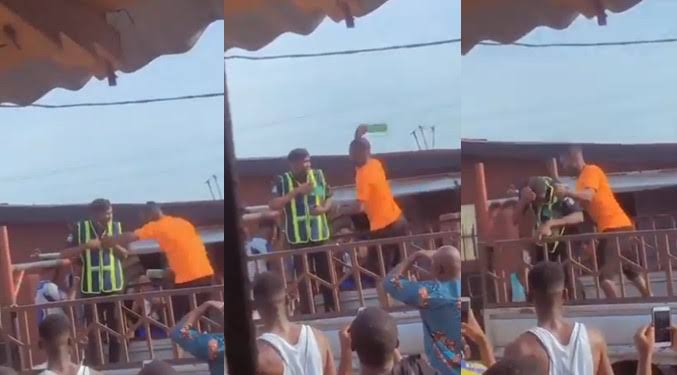 A video wherein a man — identified as a truck driver — is seen smashing a bottle on a policeman’s head appeared on social media yesterday.

In the now-viral video, the policeman and the truck driver were seen standing at the back of a truck, with the driver shouting at the officer to leave the vehicle.

Amid the altercation, the driver who was holding a bottle, suddenly hit it on the policeman’s head, while attempting to push him off the truck.

Moments before the officer is attacked, a voice is heard in the background of the video, encouraging the driver to attack the policeman with the bottle.

Confirming the incident in a statement on Wednesday, Muyiwa Adejobi, spokesman of the Lagos police command, said an investigation has commenced into the assault.

While narrating what happened, Adejobi said Daudu Ajayi, the officer in the video, had chased down the truck driver following a hit-and-run accident which occurred around Oko-Oba area.

It happened yesterday, 21st April 2021, at about 12.30pm, there was a case of hit-and-run serious accident involving a vehicle with Reg No BDG 756 YA, which hit a Camry car with Reg No. KJA 281 GQ, and as a result, a motorcycle rider, Ashiru Saadu, m, was affected and seriously injured,” the statement reads.

Adejobi added that the officer “sustained varying degrees of injuries”, while efforts are ongoing to arrest the truck driver, who is said to currently be on the run.