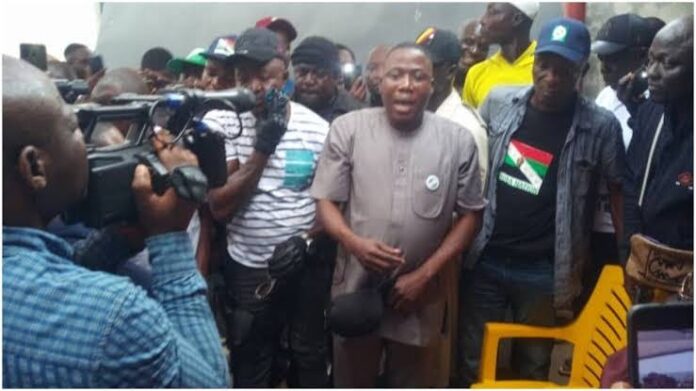 The Umbrella body of Yoruba Self-Determination Groups, Ilana Omo Oodua, has said that the pro-Yoruba Nation’s rally scheduled to hold in Lagos State tomorrow will go on as scheduled.

The group, which is headed by a Renowned Historian and Second Republic Member of the Nigerian Senate, Emeritus Professor Banji Akintoye, made this known in a statement today.

The statement made available by the group’s spokesperson, Mr Maxwell Adeleye, was titled, “Yoruba Nation’s Rally To Hold Tomorrow in Lagos – Ilana Omo Oodua … Writes Sanwoolu, Odumosu, Says “It is the duty of Police to ensure the rally is not hijacked by hoodlums”.

This is despite a police warning that no rally is allowed in the state tomorrow.

“On no account will any actual or rumoured activity, including the planned mega rally, be allowed to lock down the state or hinder the normal daily activities of the good people of Lagos State, the Commissioner of Police, CP Hakeem Odumosu, said at a media briefing held in Alausa, Ikeja, Yesterday.

However, the Yoruba self-determination group said it had written a letter to the Odumosu, and copied the Governor of Lagos State, Mr Babatunde Sanwo-Olu, to assure them that the rally will be “peaceful, orderly and not hijacked by hoodlums as earlier insinuated by Police”.

Part of the statement read, “Our rally scheduled to hold on Saturday will still hold without any fear or intimidation and we promise to be peaceful like we have always been.

“We have been peaceful, orderly and lawful at everywhere we have visited, therefore, we call on the Lagos State Police Command to ensure that the rally is not hijacked by hoodlums.

“We are happy that the Police already know that hoodlums are likely to hijack the rally. Now, we call on the police to ensure such does not happen like it didn’t happen in Ekiti, Ondo, Osun, Oyo and Ogun States respectively where we’ve held our rallies.

“It is the duty of the Police to safeguard our peaceful demonstration and protect us. On our own part, we promise to cooperate with the police towards ensuring that the rally is peaceful and orderly.”