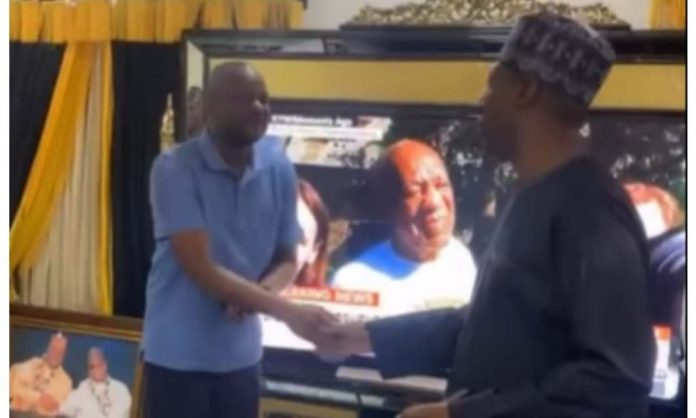 The embattled DCP is on suspension and under probe for his alleged relationship with Ramon Abbas, self-confessed international fraudster better known as Hushpuppi.

Hushpuppi had alleged that he bribed Kyari to arrest and jail “one of his rivals in Nigeria after a dispute over a $1.1 million scam on Qatari business people”.

Reacting to a viral video of Zulum and Kashim Shettima, former governor of Borno, with the embattled police officer, Gusau said the video is not recent, adding that it was recorded by some associates of Kyari at Shettima’s residence in Abuja on June 30.

The video had gone viral yesterday, with some reports claiming that the politicians paid a “solidarity visit” to Kyari.

But clarifying the circumstances of the video, Gusau stated that Kyari had visited Shettima, following rumours that the former governor had died in the United Kingdom (UK).

Kyari had shared different clips of the video on his verified Facebook page on June 30, and the governor’s spokesperson said the recordings were shared shortly after the visit.

The media aide further noted that Zulum and Shettima do not know Kyari’s residence, adding that he decided to issue the clarification since the DCP, who promised to issue a clarification on the video in circulation, did not do so.

“Kyari who hails from Borno State and in Shettima’s constituency visited the former governor to wish him well like many others had visited the Senator during the time,” Gusau said.

“Please, see video of visit by other sympathizers, link to Kyari’s post on June 30, 2021, and compare with the same video in circulation, claiming Zulum and Shettima had visited Kyari.”