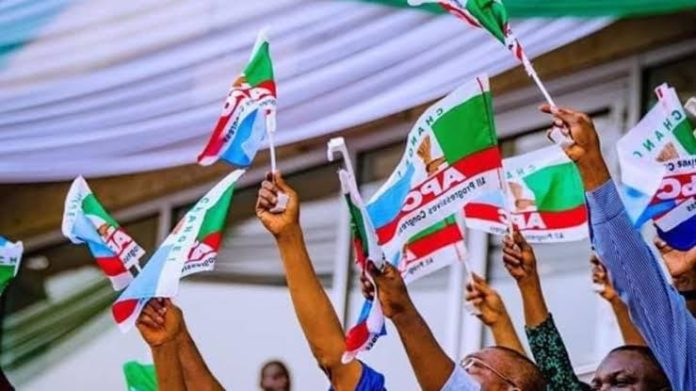 A High Court of the Federal Capital Territory (FCT), has restrained the All Progressives Congress (APC) from proceeding with its planned national convention until the case against the party pending before the court is heard and determined.

The plaintiff in the suit marked FHC/HC/CV/2958/2021, Salisu Umoru dragged the party (APC), the Chairman Caretaker Extraordinary Convention Planning Committee and Governor of Yobe state, Mai Mala Buni and the Independent National Electoral Commission, INEC before the court to challenge the planned convention.

In the motion number FCT/HC/M/9655/21, the plaintiff prayed the court for an order interlocutory injunction restraining the 1st and 2nd defe dants, allies, agency, representative, associates or whoever is action g for them through or through them from organising, holding or conducting g National Convention of the All Progressives Congress in January and February or at any other date either before or after pending the hearing and determination of the suit.
After listening to counsel I.

The matter, justice Bello Kawu of the court granted the order and restrained the party from going g ahead with the convention and also warned that the subject matter of the case is now subjudice and must nor be tampered with.

Already, a contempt application has been file before the court against the March 26 national convention of the party.

The claimant informed the court that the mere inauguration of sub-committees for the March 26 National Convention when the order of the honourable court is in force is a demonstration of disdain for the rule of law in the country.

While 30th March, 2022 was fixed for the continuation of hearing of the substantive suit, no date has been fixed for the commencement of contempt proceedings against the APC.

The claimant also commended INEC for standing by the provisions of the law and the order of the court which is still in force.

Recall that the electoral umpire, INEC, had last week wrote to the APC, insisting that the commission does not recognize Abu Bello’s leadership, and also informed the APC that it has not performed one of the requisite requirements for a valid NEC meeting or National Convention.

In the letter signed by Rose Onaran Anthony, Secretary to the Commission, the attention of the APC was drawn to section 82(1) of the electoral act which provides, “Every registered political party shall give the Commission at least 21 days’ notice ofany convention, congress, conference or meeting convened for the purpose of “merger” and electing members of its executive committees, other governing bodies or nominating candidates for any of the elective offices specified under this Act”.

The implication of the above provision is that the APC will have to send a fresh letter of 21 Days notification to INEC the moment the Court Order is vacated in order to hold its national convention.

Senior lawyers who spoke to our correspondent also highlighted that the inability of APC to vacate the court order and send the 21days notice in fulfillment of the requisite constitutional requirements will render the party’s March 26 national convention invalid in the eyes of the law.

It was also noted that the party leadership risked imprisonment for contempt of court when they went ahead with convention plans against a subsisting court order restraining the party from doing so.

Some of the senior lawyers have also advised the APC to postpone the National Convention indefinitely and focus on the forthcoming primaries so as to produce candidates for the 2023 General Elections.