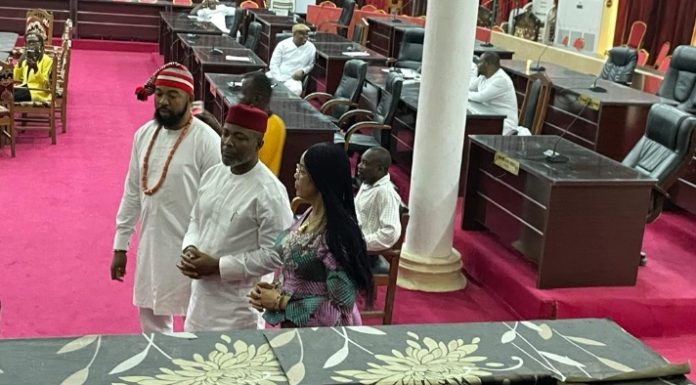 There was mild drama at the Imo State House of Assembly on Monday after six lawmakers led by the removed Deputy Speaker, Amara Iwuanyanwu, invaded the house and removed the Speaker, Paul Emeziem.

Ibeh, who represents Obowo state constituency, was first elected into the parliament in 2015 and was reelected in 2019.

He was one of the six lawmakers, Emeziem controversially suspended on July 8 for “unparliamentary conduct.”
Before Emeziem was removed, the complex was barricaded, barring Assembly staff, lawmakers and their aides from gaining access.

The session which didn’t last more than 15 minutes came to an end immediately Ibeh assumed office as the new helmsman of the parliament.

The new Speaker was one out of the 18 lawmakers whose names appeared to have signed a resolution, removing the ex-deputy speaker.

The new speaker, Ibeh, told our correspondent in a telephone conversation that he would carry every lawmaker along.
Emeziem, however, told newsmen that he had not been removed.

He said that the news of his impeachment was ” childish, null and void”.

Emeziem said, “Amara Iwuanyanwu can’t convene a plenary because he was properly impeached. If there should be any plenary, I am the one empowered by the law to call for it. Today is not our plenary day. Today is for our committee sittings not plenary. Amara Iwuanyanwu stands impeached.”