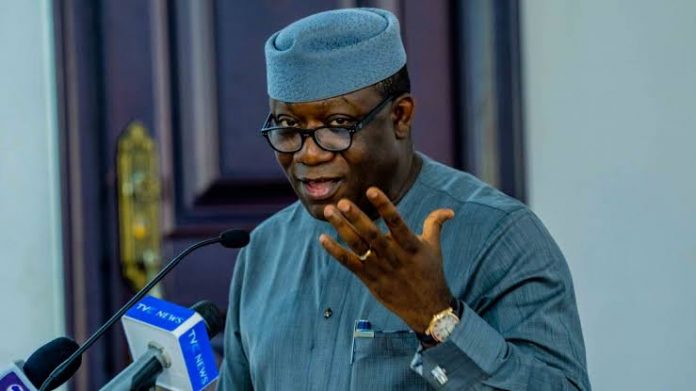 Kayode Fayemi, governor of Ekiti state, has urged youths eyeing relocation to reconsider their plans and stay back to help make Nigeria a better place.

Fayemi also said youths should organise themselves on how to “kick out” the All Progressives Congress (APC) from office in 2023 if they are not satisfied with its governance style.

He said these yesterday while speaking at ‘The Platform’, an annual programme organised by Covenant Christian Centre.

Fayemi specifically spoke about Canada which, according to him, has a glass ceiling, unlike Nigeria.

“Don’t succumb to despondency, there is a lot to hail in this country. There is a lot to frustrate you, a lot to want to make you give up and pick that visa and go to Canada,” the governor told the youths.

“I know it (Canada) is a popular destination but you know what? There is also a glass ceiling in Canada. When you get to the top of it, you will now discover there is a glass ceiling there. This is the place where there is no glass ceiling, let us work towards making it a better place.”

Fayemi, who is the chairman of the Nigeria Governors’ Forum (NGF), did not mince words in asking those not in support of the APC to unite against the party, instead of agonising about the state of the country.

“Another election is going to come if you do not like what APC is doing. Organise, stop agonising, organise against the party. Link up with others who are organising and then kick the APC out of office and put people that you think we do better not creating a situation of anarchy.”

The governor urged young Nigerians to also hold those in their wards and communities accountable, instead of engaging in what he termed as “Twitter revolution.”

“The space is more liberalised now, not like what we fought against during the military regime. I’m not talking about the Twitter revolution. Many young Nigerians are cosying, giving it to governors and attacking ministers on Twitter and Facebook,” he said.

“Go to the wards, go to the communities and challenge what they are doing there. Hold them accountable.”