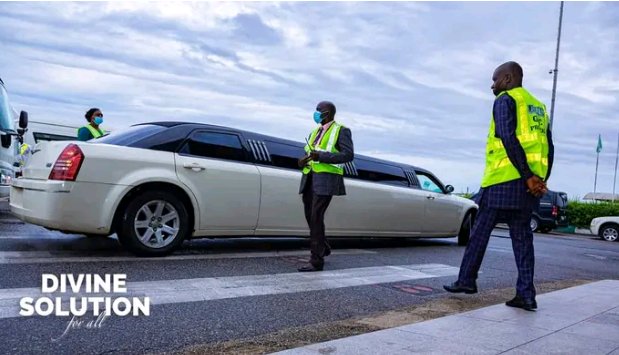 William Kumuyi, general superintendent of the Deeper Christian Life Ministry, has become the subject of a heated debate on social media after he arrived an Abuja crusade venue in a sleek platinum limousine car worth millions of naira. The renowned clergy and Esther Blaize, his wife, had touched down at the airport in the federal capital territory (FCT) on Wednesday ahead of the crusade.

They thereafter departed the airport in the limousine car to the venue of the event where they were welcomed by officials and members of the ministry.

“I just touched down at Abuja and there is excitement in the air. I am also excited because God has promised to give His children, Divine Solution,” he wrote on Facebook.

“Don’t forget to connect to the program on all my social media handles. I look forward to seeing you at the Divine Solution Crusade. Please, don’t miss it.”

The crusade, titled ‘Divine Solution For All’, is billed to commence on September 24 and end on October 3.

Nathaniel Bassey, Nigerian gospel singer, is among those enlisted to minister at the much-awaited event.

Kumuyi’s choice of a luxurious car has, however, elicited different reactions, with many users sharing contrasting views on Twitter.

Some Twitter users had tackled the cleric for using such vehicle, citing his teachings which they said often focus on modest lifestyle.

But other users argued that there was nothing wrong with his decision to use a luxurious vehicle.

“We can’t call out our Politicians and exonerate our religious leaders. Just saw this footage of Kumuyi pulling up in a Limousine for a crusade…These people are living off poor masses… To even think its these same man that talked down on material things….” a user wrote.

Here’s what some Nigerians had to say:

That person stepping down from a Limousine looks so much like Pastor WF Kúmúyì.

I am sure that's not him!

Religion was invented when the first Fraudster met the first Fool! pic.twitter.com/tijKqcCyGK

Pastor Kumuyi after decieving his gullible members that luxuries are evil.

Forgot all the lies he told you people..baba invaded Abuja in a Private Jet and cruise around in a Limousine….

Forgotten that the devil still lives in the luxury…..

abi na GS dem call am that time.They say be like Kumuyi who is humble, holy, and lives a simple life, no show off, no boasting no limousine.
Alas!
Pastor Kumuyi steps off a plane, picked up with a limo and driven a great distance less than the yards between his two eyes.

Those of you that has been deprived of watching TV as it's described as a doctrine of luxury, here is the man that deprived you of that luxury TV. Baba can't kill himself! Kumuyi jaye lo! Like my friend @activistfemi posit, to whom doctrine is given,critical thinking is expected. pic.twitter.com/rabTiQfEHX

I have zero problem with Pastor Kumuyi riding and flying in anything he cares, that is between him and his church people, not my wahala. But I am amazed at the number of gbeboruns, routinely sodomized by the ruining crass with nary a bleat, cackling as hens..#Enikure! 😏🙄

A conman like Kumuyi, who is a religious extension of the Nigerian ruling class, has stripped himself of all bourgeois pretence and hypocrisy- he has thrown his gullible church members who uncritically took his ultra-conservative doctrines seriously, under the bus. https://t.co/MhJBufQ8n0

This Pastor W. F. Kumuyi motor is so cool… pic.twitter.com/CyNizKm5AN

He came with private jet and limo🙆.

Me: He wants to pray so that Nigeria will remain for his Church business to flourish. Business of Limo and private jet. pic.twitter.com/N39qoZTNCu

“Religion is the opium of the people” — Karl Marx