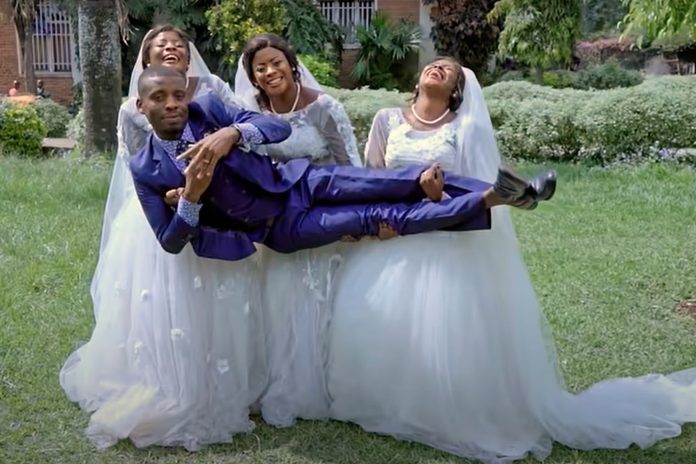 A Congolese man simply identified as Luwizo has tied the knot with a set of triplets.

The 32-year-old man from Kalehe, South Kivu, in the Democratic Republic of the Congo, recently married the sisters — Natasha, Natalie, and Nadege — in a colourful wedding ceremony at his hometown.

Speaking on how he met the triplets, Luwizo said his intention was to marry only Natalie, who he had met on social media.

“I fell in love with a girl named Natalie, we met on social media. She was incredibly beautiful, I couldn’t resist her beauty. After some time, we decided to meet, it wasn’t that easy because I was on a working trip,” he told AfriMAX TV.

“We finally met anyways. I missed her, she missed me and from there we decided to get married.”

Luwizo said during a visit to Natalie’s home to finalise the wedding plans, he realised that she was a triplet.

Upon his discovery, he said he was a bit confused when the three sisters told him to marry them.

“The most surprising thing is that I found out that I couldn’t marry one of the girls and leave the two behind. So, I was obliged to marry all of them as they are triplets,” he said.

“Today we are very happy because our dream came through. We thought we would be separated by husbands but God answered our prayers.

“As Luwizo used to come by, we led him on. Whoever was around among us received him, he wasn’t able to differentiate us so we all ended up falling in love with him.

“At first when we told him that he had to marry all of us, it became a puzzle to him but because he had already fallen in love with all of us, nothing else was able to stop our plans since we were also in love with him.

“Even though people considered it impossible for three women to share one husband, to us sharing everything has been our life since childhood.”

According to Luwizo, his parents didn’t approve of his decision and decided not to attend his wedding.